What would happen to an industry that loses one-fourth or more of its employee base?

Idaho’s agriculture industry, and particularly its farming sector, might run head-on into that hypothetical question if President-elect Donald Trump follows through on a pledge to reverse his predecessor’s executive actions on immigration and deport people living in the country illegally en masse.

Agriculture represents about 4 percent of Idaho’s $65 billion annual gross domestic product, and about the same percentage of the state labor force, reported the Idaho Statesman. The state’s share of the estimated 11.1 million immigrants living in the U.S. illegally is minuscule – approximately 45,000, or 0.4 percent, according to analysis of census data by the Pew Research Center.

But Pew’s analysis says Idaho’s workers living in the country illegally dominate in the state’s agriculture industry. More than 1 in 3 in Idaho are farm workers, and their numbers constitute 43 percent of all farm workers in the state, according to the research.

The state’s agricultural industry employs more than 40 percent of Idaho’s population of immigrants living there illegally, and more than one-quarter of all state ag workers entered the country without legal permission. Idaho, Washington and Oregon are the only three states in the nation where agriculture is tops in both of those metrics, said Jeffrey Passel, senior demographer with Pew and one of the study’s authors. 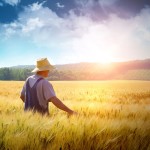 The share of agriculture workers who entered the country illegally “tends to be very high everywhere,” Passel said. But Idaho’s agriculture sector is “a little bit unusual” because it also employs the largest portion of these immigrants in the state. Nationwide, construction and the leisure/hospitality industry, which includes hotel service workers, employ the most immigrants who are in the country without legal permission.

Idaho ranked first among states in the percentage of immigrants who entered the country illegally and could avoid deportation under President Obama’s executive action on Deferred Action for Childhood Arrivals and related moves on pathways to citizenship – more than 60 percent, according to Pew. That’s because such a high percentage of Idaho’s population of these immigrants, nearly 9 out of 10, is Mexican. That population qualifies at a higher rate based on DACA’s criteria regarding longevity and family ties.

Trump has proposed immediately reversing Obama’s actions and deporting anyone in the U.S. illegally.

Tracking that population is difficult. Neither employers nor industries that depend on those workers are likely to aggressively monitor and report those here illegally. Employers may check work papers but that’s not fool-proof, and some workers who enter the country legally on work visas just overstay.

A measurable if imperfect proxy for that population is foreign-born workers. Robert Troxel is manager of the Marsing Agricultural Labor Sponsoring Committee, an Owyhee County-based temp agency for documented agricultural workers that hires about 1,800 people annually as far east as Idaho Falls and north to Payette County. Almost all are Hispanic, he said.

The state’s unemployment rate is tight at 3.8 percent. “We have been short of workers here for the last two or three years,” Troxel said.

Troxel said that if workers are deported, “it will have impact.”

“If food prices go up because it can’t get harvested or processed by the existing workforce, then there’s going to be dramatic repercussions,” he said.

Like Troxel’s group, the Idaho Dairymen’s Association has supported and worked for immigration reform to address the status of workers who are in the country without legal permission. Dairy workers are needed year-round, not seasonally, so the industry has little use for H-2A visas granted to temporary agricultural workers.

“Any change in immigration policy that brings some certainty to what that policy is, is a positive, because currently we really don’t have an immigration policy,” said the association’s executive director, Bob Naerebout. “We’ve become very dependent on foreign-born labor, and therefore the rural economy becomes very dependent on foreign-born labor.”