Starting today, Uber is letting customers in San Francisco hop in a self-driving car, if they’re lucky enough to hail one. There’s a lot the company won’t say about the launch, like how many cars they plan to roll out, but it will gradually introduce self-driving Volvos in its hometown.

The seven-year-old startup doesn’t have explicit permission from the California Department of Motor Vehicles to test autonomous cars on the road. The company has quietly had self-driving cars roaming the streets of San Francisco for at least a few weeks without making it public, potentially violating the DMV’s mandate. Uber said it has shared its perspective that its cars don’t qualify as autonomous with the DMV.

The California DMV requires “autonomous” vehicle providers to register with the state, something that Google, Mercedes-Benz, Nissan, GM’s Cruise and Baidu have done. Companies are required to file reports when drivers intercede or their cars crash. Tesla Motors doesn’t file any such reports and similarly believes it doesn’t meet the requirements for autonomous vehicles. The DMV said its permit process is designed to ensure public safety as the technology is tested. 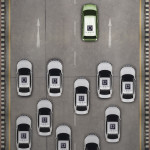 “Twenty manufacturers have already obtained permits to test hundreds of cars on California roads. Uber should do the same,” the agency said in an e-mailed statement.

While Uber executives use the words “self-driving” and clumsily trip over the word “autonomous,” the definitions are up for debate, apparently. The DMV defines an autonomous vehicle as “technology that has the capability to drive a vehicle without the active physical control or monitoring by a human operator.” Uber’s self-driving cars will have two humans involved, one ready to grab the wheel and another monitoring for pedestrians, directing the car to change lanes and helping record incidents.

In one such ride-along Tuesday, a driver took control of the vehicle more than a dozen times in less than 30 minutes. His reasons included: He was worried that the car would get too close to a pedestrian, that the vehicle wouldn’t let another merge and that the car would potentially create gridlock by entering an already crowded intersection. Other reasons were more mysterious. Sometimes the car would simply hand over control to the driver with little explanation. The driver said that the car was probably getting its sensors overloaded. In this one short jaunt around downtown San Francisco, when another car honked at the self-driving car for trying to change lanes, the Uber driver took control of the vehicle.

The DMV has proposed updating its rules to clarify the definition of autonomous. The new language would read, “Terms such as ‘self-driving’, ‘automated’, ‘auto-pilot’, or other statements made that are likely to induce a reasonably prudent person to believe a vehicle is autonomous, as defined, constitute an advertisement that the vehicle is autonomous.”

For now, at least, Uber is calling its cars self-driving. “The promise of self-driving is core to our mission of reliable transportation, everywhere for everyone,” Uber said in an e-mailed statement. “While it won’t happen overnight, self-driving will be an important part of the future.”