Insurers have received more than 2,000 insurance claims totaling more than $421 million in losses from the deadly Montecito, Calif. mudslide that destroyed or damaged more than 400 homes and businesses and killed 21 people, the California Department of Insurance reported.

“Over $421 million in insured losses represents more than property lost-behind these numbers are the tragic deaths of 21 people and thousands of residents traumatized by unfathomable loss,” Insurance Commissioner Dave Jones said in a statement. “Recovering and rebuilding lives, homes and neighborhoods will take time-and it will be difficult.” 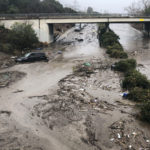 The department issued a questionnaire in which all the insurers stated that they are recognizing the proximate cause doctrine. The department has not received reports of any denials of these claims due to exclusion for mudslides.