Food delivery company GrubHub Inc. may be one of the first tech firms to feel the impact of a ruling this week from California’s highest court that makes it easier for workers to prove they are a company’s employees and entitled to costly legal protections.

Lawyers for a former GrubHub delivery worker last week asked a U.S. appeals court in San Francisco to send his closely watched case against the company back to a judge who had previously dismissed it. In light of the California Supreme Court’s decision, the lawyers said, the judge should reconsider Raef Lawson’s claims that he was an employee entitled to overtime pay and reimbursement for expenses.

Gig economy companies such as GrubHub, Uber Technologies Inc. and TaskRabbit Inc. rely heavily on the use of independent contractors to contain costs. The California court’s ruling on Monday could push some companies to rein in their use of contractors, according to several employment lawyers.

Companies must pay taxes and contribute to unemployment and workers’ compensation funds on behalf of employees, pay them the minimum wage and overtime, and cover their work-related expenses. Contractors can cost up to 30 percent less, according to several studies.

In February, a judge ruled Lawson was not GrubHub’s employee because the company did not control how he made deliveries. Many gig economy companies have faced similar claims, but the GrubHub case was the first of its kind to go to trial. 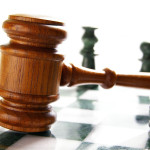 GrubHub, which has denied that delivery workers are its employees, did not respond to a request for comment on Friday’s filing.

Before Monday’s high court ruling, workers had to show that companies controlled how they did their jobs, among other factors, to win on claims that they are employees rather than contractors under California law.

Now, the burden is on businesses to prove that workers are not under their direct control, do not perform a core function of their business, and are “engaged in an independently established trade, occupation, or business.”

In Friday’s filing, Lawson’s lawyers said the judge who dismissed the case found delivery drivers were vital to GrubHub’s business. Under the new test, that means Lawson was the company’s employee, they said.

Similar tests have been adopted by courts in several states, including New Jersey, Illinois and Massachusetts. But California is home to many of the largest gig economy companies and its courts are a hub for lawsuits against them.

“A majority of gig companies emerged out of Silicon Valley, and California courts have always been seen as the incubator for how these cases should be decided,” said employment lawyer Richard Meneghello.

However, it is not clear whether courts will agree to apply the new test to older legal claims, such as those in the GrubHub case. Judges could find it unfair to apply the new standard retroactively, said employment lawyer Richard Reibstein.

But moving forward, he said, companies in the gig economy and beyond will need to consider major changes.

“Businesses operating in the state will need to re-evaluate their use of (contractors) and restructure their businesses to comply with this new decision,” Reibstein said.

(Reporting by Wiessner in Albany, New York, and Somerville in San Francisco; editing by Alexia Garamfalvi and Jonathan Oatis)