A gradually weakening tropical storm hit Hawaii on Wednesday, soaking a part of Maui and sending gusts of wind that toppled trees and cancelled flights at a number of airports in the state.

Maui Mayor Alan Arakawa urged residents and visitors to stay off the road until the Tropical Storm Olivia passed, but he was hopeful the effects of the storm on his county would be limited.

“It’s been an ordeal but we’re coming through this fairly well,” Arakawa said. “I’m not seeing any really large areas of damage, no homes destroyed or flooded to any kind of extreme measures as we did in previous storms.”

The Central Pacific Hurricane Center said Olivia was about 45 miles south of Honolulu on Oahu, the state’s most heavily populated island. The storm had maximum sustained winds of 40 mph. 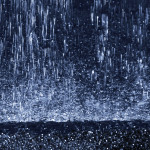 The storm made landfall twice: once in the west Maui mountains and again on Lanai before continuing to move further west.

A flash flood warning was issued for Molokai island and Maui. A wind gust of 51 mph was recorded at the airport on the island of Lanai.

A rain gauge recorded 7.72 inches of rain in 24 hours at West Wailua Iki on Maui.

The storm, which was a hurricane earlier in the week, slowly lost power as it neared and crossed the state.

Tropical storm warnings were canceled overnight for the Big Island and Kauai, but remain in place for Oahu, Maui and small islands surrounding Maui.

Public schools on the Big Island, Oahu and Kauai were open.