Young agents want change. They want more diversity in the agency sales ranks. They want better paths to grow in their careers. They want other agents to adhere to professional standards and ethics. They want faster and better technology in their agencies and in the insurance companies they use.

Most of all, today’s young agents want to see more young professionals like themselves in the independent agency system.

That’s according to Insurance Journal’s 2018 Young Agents Survey, which asks young agents for their opinions on the industry, their agencies and their career as an independent agent. 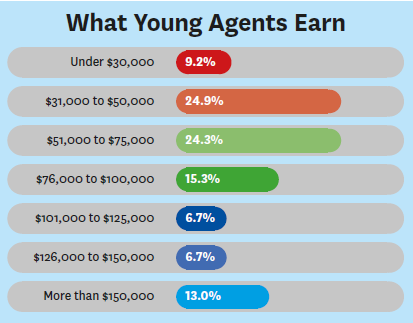 “I would like to see the younger generation get more interested and involved in the industry,” said one young agent participating in the survey.

Young agents responding to the survey said they would like to see younger professionals in leadership roles, too.

“While it is not an issue at the agency that I work for, I do see some hesitance with carriers and agencies in promoting younger, hungry individuals,” one young agent wrote in the survey.

Other agents agreed saying that more young leaders are needed throughout the industry.

“Leadership needs to become younger,” one young agent said. “There is a large gap between generations, and I see hesitation to give the millennial generation leadership opportunities.”

Other survey respondents added that in some instances, younger generations are unfairly stereotyped.

“I would love to see the industry embrace millennials,” another young agent said. “I always hear from hiring managers and agency owners that they want to hire younger people, followed quickly by a complaint about how terrible they all are.” 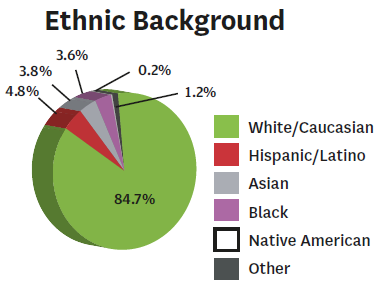 Young agents also maintain a desire for better and more efficient technology that will make their job easier. They believe that the insurance industry falls behind when it comes to its use of technology.

“I would like to see more focus on technology, as the industry is very poor at moving in the right direction when it comes to that,” one agent wrote.

Young agents are split on how they rate the property/casualty industry’s use of technology overall.

The exclusive survey revealed that slightly more than half of respondents (51.1 percent) rate the industry as “excellent” or “good” in terms of its use of technology while nearly the same number of young agents (48.9 percent) rated the P/C industry as “fair” or “poor” in this critical area.

However, according to the survey, when it comes to career attractiveness to younger professionals, the results weren’t quite as evenly balanced. According to the IJ survey, only 8.3 percent of young agents rate the P/C industry as “excellent” when it comes to attractiveness for young people. However, a whopping 68.1 percent rated the industry as “fair” or “poor” in this critical area.

Ryan Thomson, executive vice president and an agency owner for the Louisiana-based Thomson Smith & Leach Insurance Group, agreed with the survey’s findings stating that industry’s slow-pace in advancing technology is one thing that frustrates him about the insurance business.

Thomson’s father purchased the agency in 1973 after a career in banking. After college, Thomson wanted nothing to do with the insurance industry and took a job with Rubbermaid as a salesman. After five months, he called his dad to ask to interview for a job at the agency. “I came crawling back and started out with nothing. I mean literally nothing. I still keep in my top desk drawer the list I made on the first day of the 15 people I could call that had a house or were going to look at buying a house and owned an auto.” 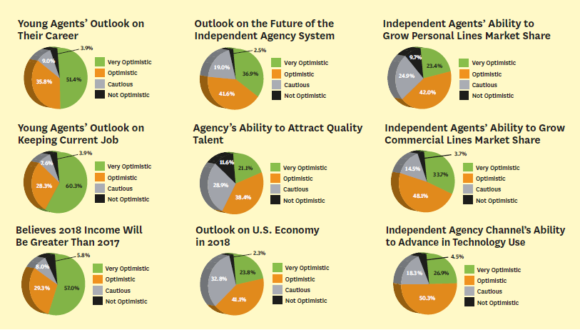 Since then, Thomas, 37, says it’s been a great ride as the agency has grown from a small six-person shop in 2003 to a strong mid-sized agency employing nearly 50 people. Now, Thomson says there’s not much he doesn’t love about the insurance world, except its technology.

“We are lagging and missing the boat on technology adaptation and being able to serve our clients better, quicker and easier,” he said. Lagging carrier tech capabilities make agencies less efficient, he says, and make processes and procedures more difficult than they need to be. In some cases, there’s little communication between his agency’s system and the carriers’ systems. “It’s a frustration from an operations and ease-of-doing business standpoint more than anything.”

Thomson says his agency has three employees just to check for errors when a policy is issued, especially through surplus lines markets. “In south Louisiana, we have to deal a lot with [wholesale] brokers. … That’s probably most of my frustration, more than the direct bill, Progressive, types,” he said.

Thomson believes technology hurdles reflect the industry’s slow-to-change mindset. “Technology is something we have to embrace, as an industry,” he said. “We can’t stick our head in the sand; we just can’t. It’s amazing still today [the number of] policies we issue in somebody else’s system that have errors.” He believes some of those errors could be overcome with better technology aimed at improving communication among agencies, carriers and wholesale partners.

While critical of the overall industry, young agents have a different view of their own agency’s use of technology. According to the Young Agents Survey, 73.8 percent of young agents rate their agency as “excellent” or “good” in terms of technology use.

Thirty-two-year-old Laura Locke Baskind, JD, who serves as the director of agency operations at Dallas-based Independent Insurance Group Inc. (IIG), says her agency’s commitment to technology and its quickness to adapt has been beneficial not only in efficiency but also in attracting talent.

“The ownership of our agency has been wonderful in terms of bringing in young talent, foreseeing the need for younger talent, [and] creating an environment that’s very adaptive and open to technology,” she said. “I now have an in-house IT manager, and we are doing our own coding, and building out our own management services, own agency app, so that we can automate things on our own to make sure that we’re the most efficient that we can be,” she said.

The agency went through a complete overhaul of its agency management software last year.

She knows IIG is not alone in this tech-forward agency mindset. Other agencies are taking great strides to push forward technology that enables agencies to be more competitive, serve customers better, and attract new employees. “I think that that is how we will attract top talent, and the younger generation,” she said.

Like Thomson, Locke Baskind grew up in her father’s agency but took a different path before joining the insurance world. She went to law school and practiced at a large, international law firm before joining the agency. She also worked for Uber Technologies.

She admits her father had been “grooming” her for the agency world since she was 14 years old. She started off in sales for the agency, then moved to an account executive role before landing into operations when someone retired. “For me, it is a much better fit in terms of my skillset, and what I’m good at,” she said. “I love to really dig in and solve problems.”

Danric Jaime, an associate in Lockton’s San Francisco office, agrees that while the industry has been “pretty slow” to adapt new technologies over the past 10 years, there are some agencies such as Lockton pushing forward. That has helped Jaime, age 35, find his niche in the agency channel.

If Jaime were to give advice to other young people considering a career in the independent agency channel he would tell them there are many areas young professionals could consider in the agency world, not just sales. Thus, they need to be more inquisitive.

“Make sure you ask as many questions as you can and then really just try to find a mentor that you can trust and help guide you,” he said. There’s a lot to consider in the insurance world. “A mentor, and it doesn’t necessarily have to be your boss, is someone you can lean on and ask advice.”

Despite the many opportunities in the agency world and insurance overall, many young professionals still shy away from it as a career to enter, but after they do, they end up staying.

Dreams of becoming a business owner is partly why Locke Baskind joined her father’s agency, but that’s not the only reason, she said. The demanding work schedule she faced working as an attorney in a global law firm helped her understand what makes a career as an independent agent a good choice.

“The work/life balance that insurance provides, the ability to make more money, to have more control over the money that I can make, and the ability to know that my weekends, my holidays and my vacations … to know that this is a place, and an industry, that values your personal time was very appealing for me,” she said.

The stability of the insurance industry is also a key factor in why young agents choose a career in insurance. Some 78.5 percent of survey respondents view the future of the independent agency system as “very optimistic” or “optimistic” while the clear majority (92.1 percent) view the outlook for the future of their own agency as either “excellent” or “good.”

Other young agents cite the challenge that insurance delivers as a reason they like being an insurance agent.

What 23-year old Adriana Solomon, associate account manager with global client services at Lockton, likes the most about her job is how dynamic her day-to-day job duties are. “No day is the same, no client’s the same, so it’s constantly challenging and really encourages me to grow,” she said.

As a native Spanish speaker and an international business major in college, Solomon fit right into Lockton’s global business culture. “I’m given opportunities that probably most 23-year-olds don’t get. I get to travel, I’ve been to Canada, I’m going to Mexico to visit a client next month … I get to go to client meetings and sit at the big kid’s table,” she said. “I’m sitting with the CFOs of major, multi-national companies and CEOs of Lockton offices.”

The graying of the current agency workforce is another reason young professionals should consider insurance, says TJ Simmons, a producer at Shield Insurance Agency based in Hudsonville, Mich.

A third-generation insurance agent, Simmons decided to accept a position at his father’s agency while still in his junior year at college. Now, at 20 years old, this young professional says insurance is “not a bad gig at all.” There is plenty of money to be made and he’s ready for the challenge.

He says other young people looking for a career should take note. “Sometimes the industry doesn’t do a good job at attracting young people because it seems boring, but I think that young people need to realize that it’s a young game.” The aging of the industry is opening huge opportunities ahead for young agents.

“All of those older agents are going to retire someday soon and so there will be a lot of policies and customers that are going to need a new agent,” Simmons said. “That’s where us young guys can come in.”

Memo to Brokers: Stick With Loyal Insurers/MGAs, Price Isn’t the Only Differentiator

Andrea Wells is a veteran insurance editor and Editor-in-Chief of Insurance Journal Magazine.