The massive wildfire in Yosemite is seen by some as a harbinger of what could be a “worst case scenario” when California enters its typical wildfire season in October — continued drought, lots of unburned fuel and a weather outlook that offers little hope for early precipitation.

The Rim Fire was fueled by dry, warm conditions and winds gusts between 15 to 30 mph. As of the time this article went to press the 236,000-acre and growing fire had only burned roughly 100 structures, but it was within miles of water and hydropower sources for San Francisco, costing the city hundreds of thousands of dollars for replacement electricity, officials said. Nearly 5,000 personnel were involved with fighting the Rim Fire, which at the time was 75 percent contained, according to fire officials.

While the cause of the fire is currently under investigation, experts were faulting the extended drought in the West as a prime driver of the size of the fire.

“Certainly the drought overall for a number or years has been quite intense in the western states, and certainly this past summer,” said Tomas Girnius, a senior scientist at catastrophe modeling firm AIR Worldwide in Boston, Mass. “And it’s nowhere close to Santa Anna season.”

Drought severity figures from the National Oceanic and Atmospheric Administration placed the area where the Rim Fire was raging under “extreme” or “severe” drought rankings continually since mid-May.

“The time before that wasn’t necessarily great either,” Girnius added.

California had less than 50 percent of its typical precipitation last year for the wet weather months, November to May, according to Roger Lamoni, a fire weather climatologist for NOAA’s Western region.

Like Girnius, Lamoni is turning his attention toward the state’s annual Santa Anna winds.

The Santa Annas are created by cool air from the Great Basin flowing rapidly out toward the warmer climes around the ocean, which can cause a drop in humidity and yield blustery winds that can stoke small wildfires into raging blazes.

“It’s like water pouring out of a pond into a lower elevation,” Lamoni said. “Relative humidity during Santa Anna days can drop to 5 percent, and the early Santa Annas can come when there are areas experiencing temperatures over 100 degrees.”

The plentiful fuel for the fires comes from consecutive dry seasons, such as last year, which has left the state with an abundance of “drought-stressed vegetation” that is receptive to any source of ignition, Lamoni said.

Such dry tender is what also enables fires to spread quite rapidly, he added.

These are among the considerations in the National Interagency Coordination Center’s National Significant Wildland Fire Potential Outlook issued for September. It calls for “above normal” fire conditions for much of California.

Adding to concerns is a neutral forecast for precipitation, meaning early rainfall before or during the October-through-November Santa Anna timeframe is less than likely.

Those concerns and the Rim Fire are the impetus for a group that provides insurance information to consumers to alert homeowners to increased potential of a rough fire season.

While the area of the Rim Fire is a lesser populated portion of the state, there are an abundance of homeowners living in high-risk areas, such as those in the wildland-urban interface, facing a potential scary couple of months, according to the Insurance Information Network of California.

According to a wildfire risk study of California last year conducted by IINC and Verisk Risk Solutions (ISO), the counties that comprise Yosemite National Park have some the highest percentages of homes in high wildfire risk areas.

“It’s worse now,” IINC spokesman Pete Moraga said. “We’ve had another year of pretty much drought in many areas.”

Comparing the potential for catastrophic losses with other states, Moraga noted that Colorado has had two consecutive seasons in which wildfires wrought record insured losses and record losses in terms of scale.

Yet the potential for losses in California eclipse those in Colorado, Moraga added.

For Moraga, Lamoni and Girnius the fuel, lackluster rainfall in the forecast and the potential for Santa Annas puts the “worst case scenario” phrase at the forefront of their conversations about the state’s wildfire season.

“The risk is there,” Girnius said. “We seem to be in conditions that would be very conducive to very catastrophic fires.” 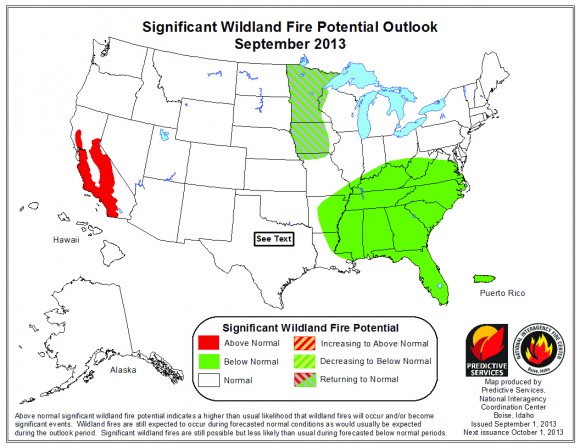