The independent insurance broker was the most active buyer segment with a total of 57 announced transactions in the first half of 2014, an increase in deal flow of approximately 90 percent compared to the first two quarters of 2013. We feel this is a significant win for the independent agent and an encouraging sign that a disciplined strategic acquisition process can compete and win against the larger institutional buyers. Most of these transactions were made by larger independent agencies buying smaller agencies or books of business.

The private equity-backed buyers were the second most active acquirer group with 47 deals announced in the first six months of 2014. This buyer segment more than doubled its deal flow compared to the same time last year, and accounted for 31 percent of the total number of deals that closed in the first half of 2014. Some of these transactions were foundation acquisitions and others were roll-ins.

Four buyers were responsible for 72 percent of the deals in this segment.

AssuredPartners completed four deals in the second quarter for a total of 12 closed transactions in 2014.

Hub continued with an aggressive acquisition strategy by closing four deals in the second quarter and nine for the year.

USI has six closed transactions so far in 2014 with two of those closing in the second quarter.

Acrisure, a relatively new agency (founded in 2005) has gained some momentum on the acquisition front and has successfully closed seven transactions so far in 2014. By comparison, Acrisure closed a total of five deals in 2012 and 2013 combined.

The public brokers were third most active buyer segment with 27 announced deals in 2014, and 13 of these closings occurred in the second quarter.

The most active acquirer in the second quarter for any buyer segment was Arthur J. Gallagher with five announced transactions.

An interesting observation is that all of Arthur J. Gallagher’s acquisitions in the second quarter were wholesale agencies, as were two of the four announced by Brown & Brown. Approximately 24 percent of the total announced transactions in the second quarter, and 27 percent of the total announced transactions in 2014, were wholesale agencies. We believe this reinforces a recent trend of private equity-backed and public brokers acquiring wholesale operations to leverage insurance distribution and hedge against market cycles.

Buyer pipelines are full, and in our opinion, merger and acquisition activity for the remainder of 2014 should remain robust. There appears to be no signs of a slowdown and buyers continue to be aggressive in pricing and terms, particularly for peak performing agencies. It may be difficult to eclipse 2012 when 325 transactions were completed (which was fueled by an increase in capital gains tax), but if the current pace holds, 2014 could go down as one of the most active years on record.

Securities offered through MarshBerry Capital Inc., Member FINRA and SIPC, and an affiliate of Marsh, Berry & Co. Inc. 28601 Chagrin Blvd., Suite 400, Woodmere, Ohio 44122 (440-354-3230). Except where otherwise indicated, the information provided is based on matters as they exist as of the date of preparation. Past performance is not necessarily indicative of future results. Marsh, Berry & Co. Inc. and MarshBerry Capital Inc. do not provide tax or legal advice. These professionals should be consulted before making any changes to your tax or legal matters. 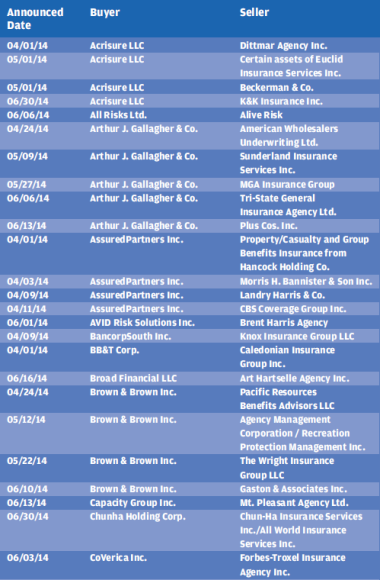 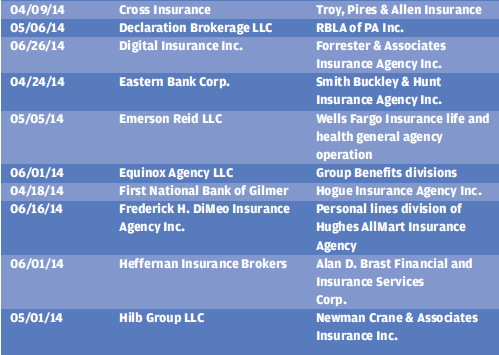 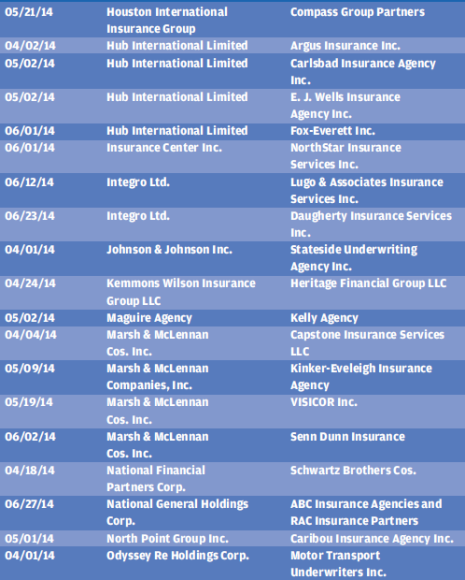 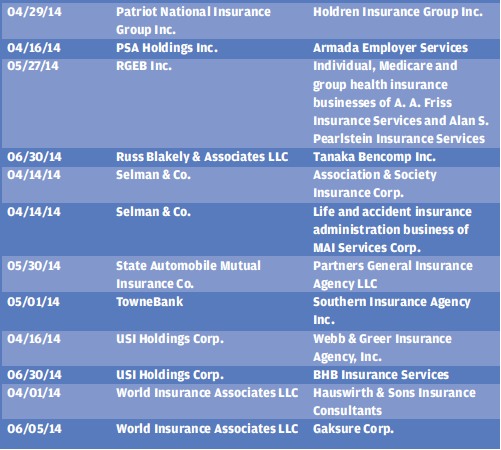