Merger and acquisition activity for 2015 set a new record with 456 deals, sailing past the previous high-water mark of 325 deals set in 2012, according to recent data. The fourth quarter closed with 104 announced transactions, pushing the total deal volume up an impressive 42 percent over the prior year, as market conditions led to increased buyer demand and opportunities for sellers.

There were 44 buyers in 2015 with multiple acquisitions, but it was the five most active that really drove activity to new heights, with 33 percent of all announced transactions. The top five, all private equity-backed, each had their most active years to date. Topping the leader board was Acrisure LLC with 39 U.S. based deals, the highest transaction count seen on record for any buyer. AssuredPartners Inc. and Hub International Ltd. followed with 34 and 30 U.S. based deals, respectively. BroadStreet Partners Inc. became an active player in 2015 with 26 announced transactions, a marked increase from two deals the prior year. Rounding out the top five most active with 20 deals was Confie Seguros Insurance Services, continuing to build its presence with regional personal lines brokerages. With a combined 149 deals, these five buyers announced 72 more deals in 2015 than the prior year.

Expanding the leader board brings in two public brokers, Arthur J. Gallagher & Co. (18) and Brown & Brown Inc. (12). Also completing the year in the double digits was NFP Corp. with 16 announced transactions, more than twice its prior year count.

While demand swelled for the historically active buyers, there were many new entrants that stepped in from the sidelines. In 2015, there were 188 buyers in the market, 100 of them first-time acquirers. Compared to the total 136 buyers the prior year, there were 38 percent more buyers making acquisitions.

In our opinion, activity in 2015 was propelled to new heights by the low cost of capital, all-time high valuations and buyer demand that seemed difficult to satiate. While market dynamics can change at any time and acquisition activity could significantly relax, based on what we are seeing, the end of the buying spree is not currently visible on the horizon.

Securities offered through MarshBerry Capital Inc., Member FINRA and SIPC, and an affiliate of Marsh, Berry & Co. Inc. 28601 Chagrin Blvd., Suite 400, Woodmere, Ohio 44122. Phone: 440-354-3230. Except where otherwise indicated, the information provided is based on matters as they exist as of the date of preparation. Past performance is not necessarily indicative of future results. 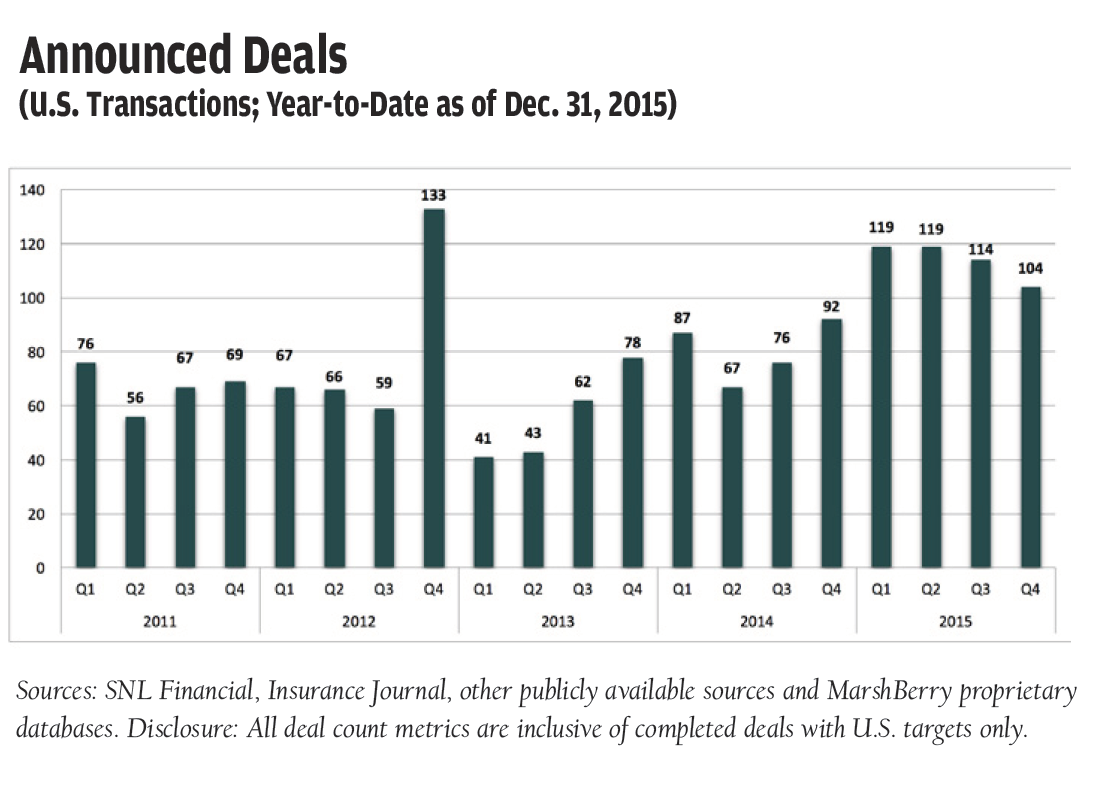 Sources: SNL Financial, Insurance Journal, other publicly available sources and MarshBerry proprietary databases Disclosure: All deal count metrics are inclusive of completed deals with U.S. targets only. MarshBerry estimates that only 15 percent to 30 percent of all transactions are actually made public. Past performance is not necessarily indicative of future results.

Reeves is a senior consultant for MarshBerry. Email: Meredith.Reeves@MarshBerry.com. More from Meredith Reeves

Pressure Builds on Insurers to Be Part of Coronavirus Business Solution