Between 2011 and 2015, benefits as a share of payroll fell in all but three states, continuing a national trend of declining benefits relative to payroll that began in the 1990s, according to the report, “Workers’ Compensation: Benefits, Coverage, and Costs.” 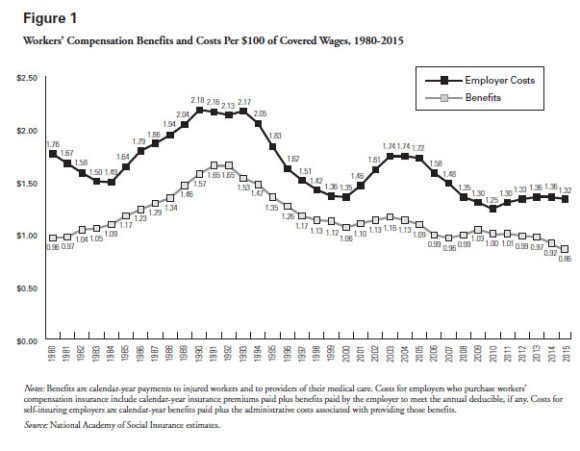 The relative decline in medical benefits paid between 2013 and 2015 can be partially explained by some states changing their workers' compensation medical care delivery systems.

“Part of the story behind the decline in benefits and costs as a share of payroll is that workplaces are getting safer,” said Marjorie Baldwin, professor at Arizona State University and co-author of the report. “Both the incidence and severity of work-related injuries have declined steadily since 1990. In fact, according to the Department of Labor, the proportion of workers who experienced injuries that resulted in days away from work reached a 25-year low in 2015.”

Between 2011 and 2015, however, total employer costs for workers’ compensation — including insurance premiums, reimbursement payments, and administrative costs — increased by 20.1 percent, exceeding total benefits paid in 2015 by $32.9 billion. The growth rate in aggregate employer costs, which had been increasing faster than total benefits paid in recent years, slowed down in 2015, increasing 2.3 percent from the previous year to $94.8 billion.

In 2015, total wages covered by workers’ compensation exceeded $7 trillion for the first time, increasing by nearly 19 percent between 2011 and 2015. Overall, in 2015, workers’ compensation coverage extended to an estimated 86.3 percent of all jobs in the employed workforce, comprising more than 135 million workers.

“The relative decline in medical benefits paid between 2013 and 2015 can be partially explained by some states changing their workers’ compensation medical care delivery systems,” said Christopher McLaren, senior researcher at the National Academy of Social Insurance and lead author of the report. “Some of the changes involve, for example, implementing fee schedules that set maximum reimbursement rates for medical care or adopting treatment guidelines,” he said. Many states have also enacted new disability rating procedures and compensability requirements that impact cash benefits paid. “All of these factors influence the share of medical benefits, as well as total benefits and costs.”

The Academy report highlights state-by-state changes in coverage, benefits and employer costs during the past five years. The state-level results show that between 2011 and 2015:

The is the 20th annual “Workers’ Compensation: Benefits, Coverage, and Costs” report published by the National Academy of Social Insurance. The report provides the only comprehensive data on workers’ compensation benefits, coverage and employer costs for the nation, state, District of Columbia and federal programs.

Workers’ compensation, the nation’s first social insurance program, pays medical benefits to the providers of health care for injured workers, and cash benefits to workers whose injuries prevent them from working.