Many years ago, a well-known insurance company went from being highly rated to insolvent almost in a fortnight. Most people in the industry older than 50 years old remember that time. The failure was a shock that created lasting skepticism about insurance company ratings. The industry has not had a similar event in a decade or more, which tracks with historic surplus and the historic soft market that has lasted almost a full decade (insolvencies are rarer in soft markets). To a large degree, the industry has lost institutional knowledge of what a large insolvency means, especially when everyone thought the company was solid.

When institutional knowledge is lost, people begin taking for granted the good times and they do not consider that bad things can occur. Many younger people cannot relate to advice regarding what to do if a carrier becomes unstable. A large carrier becoming unstable is a possibility they have never considered and cannot fathom.

This loss of institutional knowledge is concerning because while there is record surplus and surface stability, many red flags are flying. I am not crying wolf. I am simply attempting to create awareness of a severe event that has painful consequences, that has occurred with some regularity in the past.

Just because it has not happened in the past 10 years does not mean it will not happen again. In fact, some similarities exist now with how the economy was supposedly crash-free, just before the credit crises.

Luck is where opportunity meets preparedness.

Among the warning flags are:

2. The number of downgrades. Downgrades have exceeded upgrades for the third consecutive year according to A.M. Best in February 2014.

These deficits are not spread evenly. It is likely that specific companies have more than their disproportionate share. According to a story in Insurance Journal on Oct. 15, 2013, Tower Insurance announced a $365 million loss reserve charge after previously indicating the charge would “only be $60 million to $110 million.”

The company’s future is now being determined.

Even people who remember the highly rated carrier crashing so quickly, even those most acutely hurt that had E&O suits filed against them because that carrier failed, may not fully appreciate how industry changes could drastically impact them quite differently. The industry has changed so much since then. 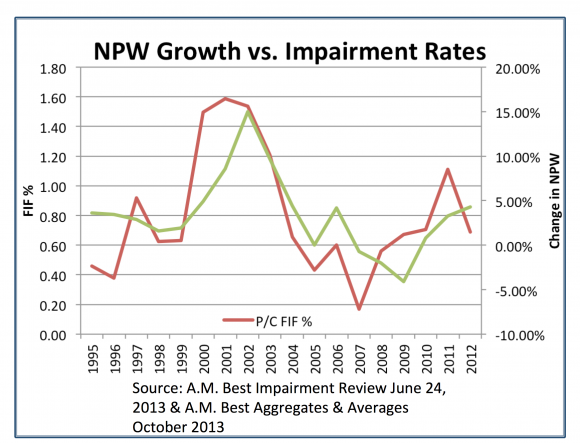 What is your contingency plan? How does the service center contract address this possibility?

I am not suggesting any company with a service center is in jeopardy. I am recommending that agencies not take their stability for granted and forge a contingency plan now. If for no other reason, we may someday again have a major carrier promote a new CEO that decides to quit the property/casualty business suddenly as one did in the early ’90s or decides to implement a new distribution model.

Similarly, what if an agency is using a non-carrier service center and that company locks its doors and pulls their computer plugs?

What happens to your agency? Your data? Your customer service? How does the contract address this possibility?

Most agencies were heavily paper-based when that large carrier failed. Downloads did not exist. Paper was likely a blessing. Consider what would happen in today’s world?

I encourage all readers to build their contingency plans. Hopefully you will never use them.

If you do, you will realize the true beauty of the quote that: “Luck is where opportunity meets preparedness.”

Burand is the founder and owner of Burand & Associates LLC based in Pueblo, Colo. Phone: 719-485-3868. E-mail: chris@burand-associates.com. More from Chris Burand