Will robots take your job? The answer depends on where you live.

The threat varies “strikingly” between countries and regions, with as many as 40 percent of jobs at “high risk” in Western Slovakia and just 4 percent in the area around Oslo, the OECD said Tuesday. According to its research, across 36 member countries, 14 percent of jobs are considered at high risk.

Automation and the changing nature of work is already in the spotlight, with workers and governments grappling with uncertainties surrounding new technologies and how to safeguard jobs. The OECD expects the development of artificial intelligence will accelerate the pace of automation and raises risks to high-skilled jobs that until now were considered sheltered from technological change.

The World Economic Forum said this week that machines and automated software will be handling fully half of all workplace tasks within seven years. But it wasn’t all gloomy, with the report also suggesting that innovation in areas such as AI and robotics could create more jobs than it threatens.

The OECD noted that geographical disparities present policy makers with an added dilemma. That’s because the regions in most need of automation to boost productivity are also often those at the highest risk of losing jobs to technology.

“Technological innovation such as automation can drive productivity growth, generate new jobs and contribute to better living standards,” said OECD Secretary General Angel Gurria. “But we must guard against any increase in regional divides in job quality and employment.”

The differing threat from automation is partly explained by the concentration of certain industries in one region. Additionally, workers’ rights vary across countries, so similar jobs in different jurisdictions might not face the same risks.

It may be hard for some regions to recover as automation can lead to the sudden loss of jobs that take time to be replaced. This could lead to prolonged unemployment and drag on wage levels for some groups of workers, the OECD said. 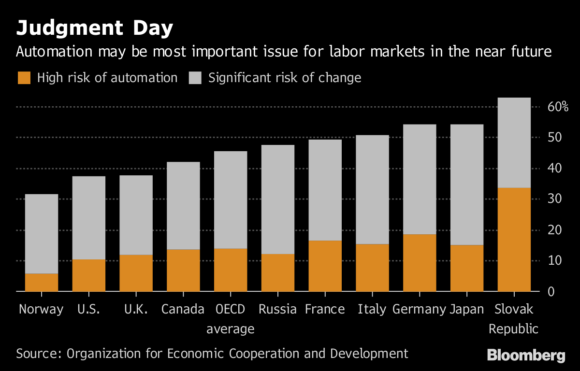