The bustling boat traffic on Europe’s Rhine river ground to a halt for the first time in living memory last year, as shrinking alpine glaciers and severe drought made the key transport artery impassable. Those historic conditions could be repeated in a few weeks.

With little rainfall recently, water levels at Kaub — a critical chokepoint near Frankfurt — dropped to about 150 centimeters (59 inches), half the depth from just a month ago. Movements of the heaviest barges are already restricted, and all river cargo could again cease if the level falls below 50 centimeters.

With Rhine traffic at risk of a back-to-back halt, the effects of climate change have become increasingly tangible in the region. Wildfires in Sweden, violent storms in the Mediterranean and German concerns about motorways buckling in June’s record-breaking heat have heightened attention on the environment.

“Extreme weather events are becoming more common,” Chancellor Angela Merkel said this month in a weekly podcast. “We must do more” to protect the planet.

The Rhine is critical to commerce in the region. Europe’s most important waterway snakes 800 miles through industrial zones in Switzerland, Germany and the Netherlands before emptying into the North Sea at the busy Rotterdam port. It’s a key conduit for raw materials and goods from coal and iron ore to chemicals, fertilizers and car parts. Last year’s disruption contributed to a contraction in the German economy.

“It is painful when we have these periods of low water,” the country’s Transport Minister Andreas Scheuer said at a June gathering of experts to discuss options to keep Rhine traffic flowing. “It’s damaging to the German economy and has implications for our standard of living.”

Companies up and down the Rhine — from Royal Dutch Shell Plc to BASF SE — are stepping up emergency planning: buying smaller boats, protectively booking truck and train capacity and cramming more supplies into warehouses. Forecasts for a heatwave have further jangled nerves, with hot and dry conditions expected to remain in place for at least the next 10 days, according to weather forecaster Maxar. 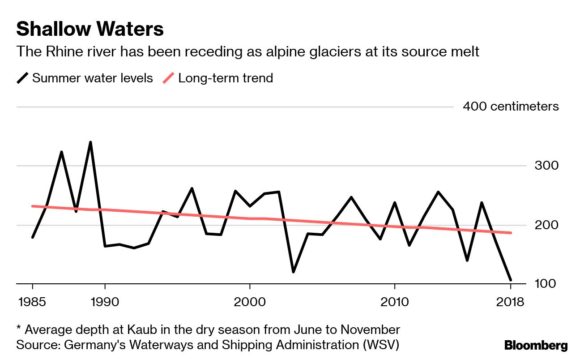 Reflecting a trend seen in the Himalayas, the Rockies and other mountainous regions of the world, alpine glaciers have shrunk steadily as global warming makes melting in summer outpace accumulation of snow in winter. That means there’s less water feeding rivers each year. An April study by ETH Zurich predicts that half of the Alps’ glaciers could disappear within three decades.

That would cause the once-mighty Rhine to become even more reliant on rainfall, but changes to the jet stream make it more likely that arid heat from the Sahara sweeps over Europe. Two-month forecasts from Germany’s DWD federal weather service point to a third consecutive summer of exceptionally dry weather.

Efforts to mitigate the impact of a renewed halt of Rhine shipping — which caused Germany and Switzerland to tap into emergency fuel stockpiles last year — are merely stopgaps. Road and rail capacity is limited and much more expensive than barge transport. Storage availability along the Rhine is already tight because of Brexit-related stockpiling.

“The Rhine is a natural river,” said Hans-Heinrich Witte, president of Germany’s WSV rivers authority. “There are limits to what we can do to keep it open as an industrial waterway.”

“We get 30 million tons of raw materials shipped from Rotterdam” down the river, said Premal Desai, head of the Duisburg-based company’s steel unit. “For Thyssenkrupp Steel, the Rhine is a question of survival.”