Bank of England Governor Mark Carney was in no mood for laughter as he stood in his tuxedo before the great and good of the British insurance industry.

“I’m going to give you a speech without a joke, I’m afraid,” Carney began his remarks on the night of Sept. 29, 2015, at Lloyd’s of London. “So charge your glasses and prepare yourself because I’m going to talk about a serious subject.”

Not Brexit, which Britons were still nine months from voting for. Instead Carney put investors and insurers on notice that they risked underestimating the “huge” threat climate change posed to global financial stability. He described a “tragedy of the horizon” where such dangers aren’t within the normal field of view of businesses, politicians and technocrats.

It was a warning shot that took time to echo in policy-making corridors. But what Carney did was to start conversations at the highest levels of financial services about global warming, as almost every major central bank began a dialog with the institutions they work with.

“Carney’s Lloyd’s speech was a landmark,” said Nick Stern, a former U.K. government adviser and now chair of the Grantham Research Institute on Climate Change and the Environment. “Every cause needs leaders. Now it’s become much more the core and midstream of discussions. It’s become more of a stability story.”

Four years on, a global political movement against global warming is building momentum. Carney is taking the message to wider audiences, even addressing the United Nations climate summit this week. Most major central banks — with the exception of the U.S. Federal Reserve — are joining forces to promote sustainable growth, after realizing that climate change threatens economic output and could even sow the seeds of a financial crisis.

One danger evident in Europe is the disruption to supply routes caused by higher temperatures, with the recent drying of the Rhine River creating transport bottlenecks. Then there’s the risk of economic shocks caused by effects of extreme weather, whether in the direct damage they cause or their impacts on production. 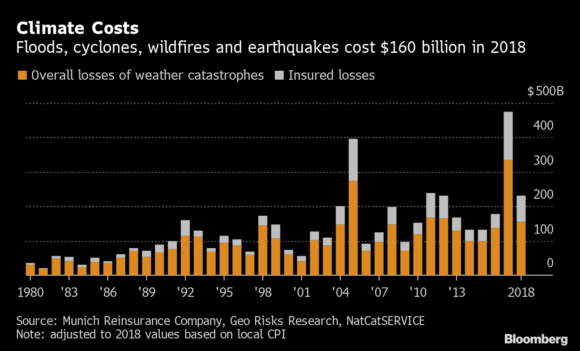 Mortgages for homes built on flood-prone lands, or bonds for companies reliant on fossil fuel-intensive business, could pose a threat if their riskiness isn’t quantified and mitigated. And insurance, a crucial node of the finance system, might find its viability undermined by climate change.

Contemplating such dangers, Carney has warned of a “Minksy moment,” in which a climate-related alarm could cause asset prices to collapse. Bank of France Governor Francois Villeroy de Galhau said this month that global warming could hit growth and lead to upward price pressures, generating a “stagflationary shock.”

For those reasons, the BOE wants to test financial institutions’ resilience to climate-related risks in 2021. It’s working to integrate global warming scenarios with macroeconomic and financial system models.

“We absolutely recognize that this is groundbreaking stuff, and it’s hard,” said Sarah Breeden, the BOE official in charge of the project, speaking in an interview on a day of record-breaking summer heat in London.

Breeden is liaising with institutions on test scenarios, which include a continuation of the world’s current pathway of carbon emissions, where physical risk is high as the planet gets hotter. Then there’s the transitioning of economies to carbon-neutral models. The warning from central bankers is to do it in an early and orderly way, rather than a late and disruptive one with more economic damage.

Officials elsewhere are also trying to forge policies to test banks’ resilience to climate change and incentivize them to give out green loans. To pursue those goals, eight central banks and supervisors founded the Network for Greening the Financial System in 2017. Its membership now totals 42 institutions across five continents.

“If we look at what’s been happening in central banking since the global financial crisis, anyone who was asleep for a decade would now rub their eyes,” said Ulrich Volz, an academic at SOAS University of London who advises central banks on sustainable finance.

Breeden of the BOE chairs one of three joint programs within the network of 42 engaged institutions, assessing threats to the economy and financial system from risks associated with climate change. They want to compile a handbook of scenario analyses that different countries can refer to.

The Bundesbank is leading a program to review strategies to support sustainable investments, and working to produce another guide on greening financial markets, while the People’s Bank of China is running a project on integrating climate risk into supervision.

Some observers say the Chinese central bank is a trailblazer, offering incentives to banks to give out green loans, and requiring obligatory climate-related stress tests. The country has nearly 10 trillion yuan ($1.4 trillion) of outstanding green loans, or about 10% of the total held by banks as of June 2019. China is also the world’s biggest green bond seller.

The “political push from the very top” helped mobilize policies and resources, albeit from a low base, PBOC adviser Ma Jun said in an interview.

Countries remain divided on how best to act, and the Fed is conspicuously absent from the Network for Greening the Financial System. While regional branches publish research on the topic — in March, the one in San Francisco acknowledged that climate change risks are relevant to the central bank’s stability mandate — Fed Chair Jerome Powell maintains that it’s a “longer-run issue” outside its scope.

By contrast, Christine Lagarde, who becomes ECB president in November, is very much aligned with Carney. She wrote to the European Parliament in August that the discussion on central banks’ role in mitigating global warming should be a priority.

As with green politics more generally, the matter can draw controversy. Among criticisms of central banks’ involvement are claims that it’s too charged an issue, and that it goes beyond their mandates. ECB official Yves Mersch said last year that such institutions risk their independence when they venture “far into a political agenda with distributional consequences.”

Others argue that they should be doing more. Columbia Professor Adam Tooze says central banks are arriving late to the issue and need to “move into a more proactive mode.” Activists and some academics call for the removal of carbon-intensive companies’ bonds from quantitative easing programs.

“The perception is not that we’re in a climate emergency,” said Danae Kyriakopoulou, chief economist at the Official Monetary and Financial Institutions Forum, a London-based think tank. “Things are going in the right direction, central banks are recognizing this, but at the same time, the tragedy of the horizon is still there.”