As massive wildfires devastate swathes of Australia and supercharge the debate over the impact of climate change, government data show the nation has never suffered a hotter or drier year than 2019.

The average temperature last year was about 1.5 degree Celsius (2.7 Fahrenheit) above the 30-year mean, according to data from the Bureau of Meteorology, which goes back to 1910. Meanwhile, rainfall dropped to its lowest in figures back to 1900. The government agency is scheduled to release final figures and its annual climate report next week. 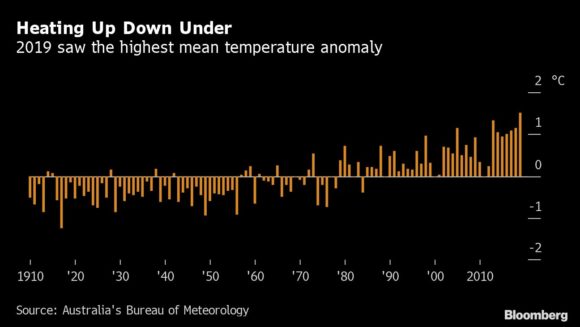 Confirmation the world’s driest-inhabited continent is in the grips of historically extreme weather comes as Prime Minister Scott Morrison’s government faces sustained criticism from environmentalists and the opposition for downplaying the link between the huge wildfires and climate change and for not taking stronger steps to curb carbon emissions.

Weather conditions have been particularly severe in recent weeks, with December more than 3 degrees warmer than normal and rainfall at a paltry 15.4 millimeters (0.61 inches), less than a third of the normal level for the month. 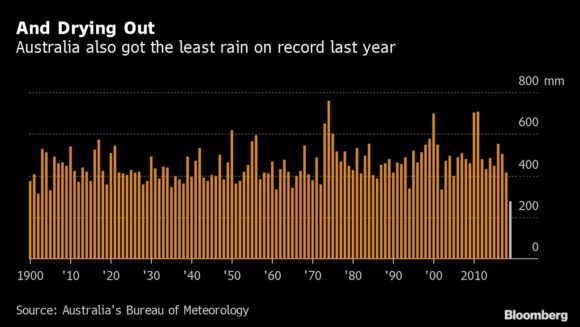 A strong positive Indian Ocean Dipole — a measure of the difference between sea surface temperatures in the tropical western and eastern Indian Ocean — has reduced rainfall across Australia and contributed to the heat and dryness. The indicator peaked in mid-October but has since dropped back into neutral territory.

–With assistance from Phoebe Sedgman.