As the devastation from Australia’s bushfires widens, the insurance industry is calling for concerted action to mitigate the impact of climate change.

Months of out-of-control fires have burnt an area more than five times the size of Wales and industry-wide claims of A$700 million [US$480.8 million] are expected to mount.

They follow large costs from other recent extreme weather events, including a hailstorm in Sydney in 2018 that led to more than A$1.3 billion [US$894 million] in insurance losses and floods in the northern town of Townsville that cost A$1.2 billion [US$825.2 million].

With scientists predicting climate change will increase the severity and frequency of such disasters, there are concerns insurance premiums may skyrocket beyond the reach of those needing the protection most. The issue is particularly acute in Australia, a land of climatic extremes from the tropical north, to the central desert to the temperate coasts. 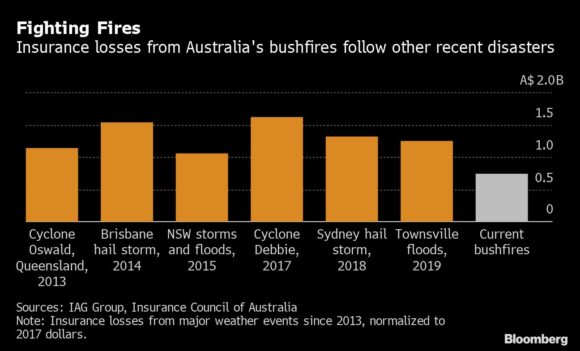 “If we seriously think we are crossing a new normal, of course insurance premiums are going to have to go up,” said Karl Mallon, chief executive officer of climate-adaptation consultancy Climate Risk. His previous modeling has suggested that without action, insurance could be out of reach for up to 1 in 20 Australian homes by the end of the century. “The battleground is going to be on affordable insurance going forward.”

Key to that debate is what should be done to make communities and infrastructure such as roads and power grids more resilient to events such as heatwaves, floods and fires. Another critical question is where people should live.

“Globally, as our cities get bigger, we’re moving into more hazardous areas. Disaster mitigation is absolutely key,” said Andrew Gissing, head of risk and resilience at Risk Frontiers, a provider of catastrophe-modeling solutions. “We spend too much on disaster relief and recovery and not enough on mitigation.”

As it faces escalating claims, Australia’s insurance industry is becoming increasingly vocal in its demands for long-term action.

“No property should be un-insurable,” Campbell Fuller, spokesman for the Insurance Council of Australia, told Bloomberg TV on Wednesday. “But that requires governments to act now to help reduce the risks to properties for what is already here, let alone what is coming with climate change.”

The industry wants to see the government invest in a whole range of permanent measures including better bushfire research, flood prevention and cyclone resilience, he said.

“There is no quick fix this year,” Fuller said. “We have urban areas encroaching on traditional bushfire zones. We have many communities where the building codes pre-date modern understanding of bushfires and each of those issues will need to be addressed in a broad sense by all levels of government, with industry input and with academic input.”

Claims for this year are expected to rise “dramatically,” Fuller said, noting that access is still impossible for many areas and commercial claims will take weeks to flow through.

Even if bushfire losses almost double, they would still fall short of the costs of other extreme weather events such as the Sydney hailstorm in 2018. While the fires tend to affect rural areas hardest, events like cyclones and floods have hit at the heart of the nation’s more heavily populated and wealthy coastal cities.

For the companies themselves, for this year at least reinsurance will help firms like Insurance Australia Group Ltd. and Suncorp Group Ltd. deal with the blow.

“The 2019-20 season is likely to be the most destructive and costly in decades, with the economic impact on the country far outweighing insured losses,” Bloomberg Intelligence analyst Steven Lam said. However, “net claims for IAG and Suncorp should be limited by reinsurance recoveries.”

Sydney-based IAG said last week that it expects net bushfire claims of A$160 million [US$110 million] and fiscal first-half net natural-peril claim costs of about A$400 million [US275.1 million], A$80 million [US$55 million] above its semi-annual allowance. The company’s shares have slipped 1.2% this year.

Photograph: Firefighters work to extinguish a bushfire that burns near homes on the outskirts of the town of Bilpin on Dec. 19, 2019 in Sydney, Australia. Photo taken by David Gray/Getty Images.