Indeed, broker Aon reveals that more than 60% of 2020’s insured catastrophe losses of $54 billion have been caused by secondary perils. “[E]ight of the last 10 years have seen higher economic losses from secondary perils than primary perils,” according to Aon in its report titled “Reinsurance Market Outlook – September 2020.”

More than 50% of the 2017 to 2019 US$152 billion in insured losses can be attributed to the accumulation of losses from smaller and mid-sized secondary natural catastrophes perils, said Swiss Re in a recent virtual media presentation. (See graphic below).

Secondary perils are generally defined as smaller to mid-sized events, or the secondary effects, which follow a primary peril. Secondary effects of a primary peril could include hurricane-induced flooding, storm surges, hailstorms, tsunamis, and fire following an earthquake. Other secondary perils are independent events, often not modeled and receive little monitoring from the insurance industry, said Swiss Re’s sigma, which has described these types of secondary perils, in part, as torrential rainfall, thunderstorms, drought and wildfire outbreaks.

Some of those secondary perils, such as bush fires and wildfires, “have been, or are, being driven by climate change,” said Swiss Re’s Group Chief Underwriting Officer Thierry Léger, in the media briefing held in lieu of the 2020 reinsurance Rendez-Vous de Septembre, usually held annually in Monte Carlo. (Click on the Swiss Re graphic below to expand it). 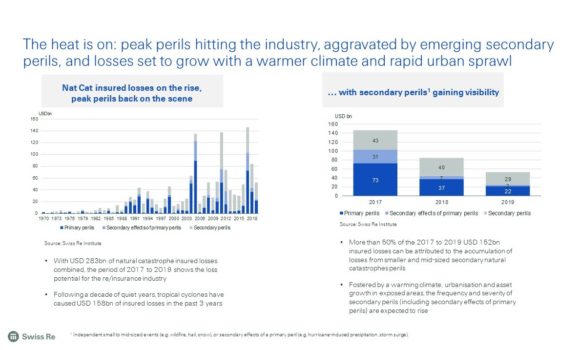 “Unfortunately, as we all know, the world is finding it very difficult to tackle climate change, to take action to actually improve climate change,” Léger said. “And therefore, we expect at Swiss Re that this trend of secondary perils is becoming more and more important, driven by climate change, and will be a continued trend that will get worse in the years to come.”

When discussing some of the drivers of reinsurance rate hardening, Torsten Jeworrek, CEO of Munich Re’s reinsurance business, mentioned social inflation, low interest rates, tightening retrocession capacity and the “so-called loss creep from secondary perils, which are often not modeled in same quality” as other perils affecting the market. (He spoke during Munich Re’s virtual Monte Carlo media conference).

During SCOR’s virtual media briefing, Jean-Paul Conoscente, CEO of SCOR Global P&C, said: “There is clearly an impact of climate change on the frequency and severity of … wildfires.”

Clearly the link between climate change and the increase in the frequency and severity of some nat cat events “is well documented and scientifically demonstrated,” said Hannover Re CEO Jean-Jacques Henchoz, citing as evidence the recent spate of hurricanes but also the wildfires in California and Oregon as well as bushfires in Australia.

“Headwinds for the industry include evolution of COVID-19 related losses and coverage as well as trends that were emerging prior to the pandemic including reinsurer combined ratio results, social inflation, catastrophe loss experience driven by more secondary perils, and low interest rates,” said the Aon report. (Click on the graphic below to expand it).

Aon said these secondary perils are one of the trends causing primary insurers to purchase more reinsurance. “[A] growing number of ‘mini-cats’ from secondary perils have eroded underwriting results, and we have seen insurers shift toward earnings protections,” said the report, devoted a whole section to the topic of secondary perils.

“While tropical cyclones often attract most focus given the high financial toll that landfalling events can incur, losses from ‘secondary’ perils cannot and should not be ignored,” added the report.

Individual financial losses – either economic or insured – from severe convective storm, flooding, wildfire, winter weather, European windstorm, and drought may not frequently have the large losses that hurricane events have the potential to carry, said the report, citing insured losses from landfalling tropical cyclones that exceed US$10 billion such as Katrina, Sandy, Irma, Andrew and Jebi. “[B]ut individual event losses can still be significant and the accumulation of smaller losses has the potential to cause notable challenges for re/insurers,” it continued.

Indeed, the report noted that in eight of the past ten years, secondary perils have aggregated to higher economic costs than primary perils globally. “Only 2011 (major earthquakes in Japan and New Zealand) and 2017 (Hurricanes Harvey, Irma, and Maria) featured tropical cyclone and earthquake damage costs that surpassed the secondary ones.”

The report pointed to the example of Australia, which the highest levels of secondary perils – even beyond the United States.

“In fact, more than 74 percent of aggregated losses [in Australia] since 1967 have come from severe convective storms (notably hail), inland flooding, bushfires, and non-tropical systems known as ‘East Coast Lows,'” said the report, noting that primary perils such as tropical cyclone and earthquake, only account for 26 percent of aggregated losses.

In addition to accounting for most aggregate losses, six of the top 10 event losses in Australia are also a result of secondary perils.

As examples, Aon pointed to the 1999 Sydney hailstorm, which remains the most expensive event for the Australian insurance industry on a normalized basis. “The Southern Hemisphere summer of 2019/20 resulted in the costliest bushfire season in Australia’s history after more than 10 million hectares (25 million acres) – equal to 8% of Australia’s total vegetation – with insured losses surpassing A$2.3 billion (US$1.68 billion).”

“The magnitude and consistency of losses from secondary perils makes it clear that properly understanding and managing the risk is an important key to controlling loss volatility and protecting earnings,” said Aon, noting, however, that the right tools must be in place in order to accomplish this. “An interesting observation from the modeling perspective is the disconnect between insurance penetration for individual secondary perils and industry investment in analytics tools to support those perils.”

Discussing one secondary peril — small and medium-sized severe convective storm events in the U.S. — Aon noted that these events often produce losses that are retained by insurers and are not heavily ceded to reinsurers or alternative markets. As a result, these SCS events do not broadly influence reinsurance pricing, with the exception being “those regional or single state insurers that do see losses reach into their reinsurance program.”

Through the end of August 2020, Aon’s report said, the U.S. had already recorded 10 individual billion-dollar SCS events for the insurance industry, which is the highest such number on record, surpassing the eight SCS events reported in 2011.

As these SCS events are occuring with more frequency, Aon said, this is likely to enhance the use by insurers of aggregate excess-of-loss reinsurance “as a safe form of cover.”

“Such a solution is an effective way for insurers and the broader industry to handle increased payouts given a higher number of occurrence events and changes in event severity,” the report affirmed.

“The current availability of excess capital in the reinsurance market continues to reinforce that it is well-positioned to handle more of these types of events, and multiple larger scale and costly natural perils.”

Photograph: This picture taken on Dec. 31, 2019 shows a firefighter hosing down trees and flying embers in an effort to secure nearby houses from bushfires near the town of Nowra in the Australian state of New South Wales. Photo credit: Saeed Khan/AFP via Getty Images.

Why Some Hospital Workers Choose Dismissal Over COVID Vaccine