The future of Nord Stream 2 looks increasingly uncertain as the U.S. ramped up pressure on the project with new sanctions, and companies walked away from the controversial Russian gas link.

The new sanctions come just days before work on the pipeline is scheduled to start in Danish waters. Questions now remain whether the link, owned by a unit of Gazprom PJSC, will see further delays as the U.S. tries to limit Russian influence in Europe.

U.S. Warns of Sanctions on European Firms and Insurers Over Russia’s Nord Stream

For its part, the Kremlin committed Tuesday to finishing the project while Gazprom warned of the political risks involved. In Germany, lawmakers have sought a legal workaround that they believe can protect a key port from sanctions.

The U.S. State Department placed sanctions on the pipelaying vessel Fortuna, that was slated to work on the project, and its assumed owner KVT-Rus. Meanwhile Zurich Insurance Group AG terminated all of its coverages impacted by the sanctions and engineering firm Bilfinger SE is said to have cut ties with the project.

The moves follow those of certification company Norway’s Det Norske Veritas Holding AS, and the Danish engineering firm Ramboll. All this creates uncertainty over how quickly those companies can be replaced and whether work will resume later this month, as planned.

“It is a very delicate time for Nord Stream 2,” said Richard Morningstar, founding chairman of the Atlantic Council’s Global Energy Center and Former U.S. Ambassador to the EU. “Recent events create a lot of question marks on whether or not Russia will be able to complete the project.” 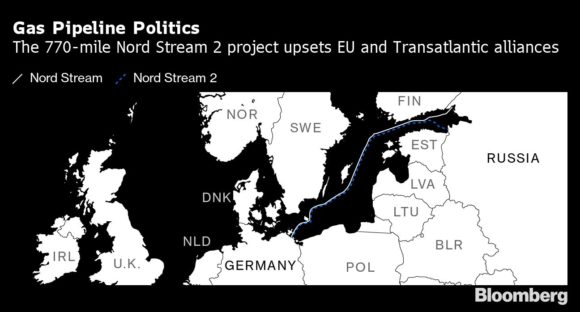 U.S. pressure over the project has ramped up in the last days of President Donald Trump’s term. The State Department has notified companies and the German government on the risks of supporting the project.

Construction of the 1,230-kilometer (764-mile) gas pipeline that’ll deliver Russia’s natural gas to Germany was halted after U.S. sanctions in December 2019, when all but 160 kilometers of the link had been put in place. The U.S. — which has tightened restrictions — maintains that the gas link gives Moscow too much leverage over Europe’s gas supplies and threatens the security of the region.

Nord Stream 2 “would give Russia the means to completely bypass Ukraine, depriving Ukraine of vital revenues and opening it up to further Russian aggressive actions,” Secretary of State Michael Pompeo said.

Nord Stream 2 didn’t immediately respond to a request for comment. It’s not clear now whether work will resume later this month, and while Zurich walking away is a blow, there are other insurers still linked to the project.

Gazprom sees construction of the gas link as one of its investment priorities for this year, according to the company’s bond prospectus published earlier this week.

In Germany, lawmakers have put in place a legal mechanism in Mecklenburg-West Pomerania where the pipeline makes landfall with the aim of being a lightning rod for sanctions and averting direct legal problems for companies working on the project.

Last year, as the U.S. started preparations for tighter sanctions against Nord Stream 2, the vessel Fortuna changed hands at least twice since then. Most recently, in December, it was registered with Moscow-based KVT-Rus OOO, according to the Russian newspaper RBC.

Nord Stream is one of a long list or pressing issues that incoming President Joe Biden will have to grapple with at the start of his four-year term which starts Wednesday. Antony Blinken, Biden’s pick for secretary of state, is “determined to do whatever we can to prevent” the completion of the pipeline, he said during his confirmation hearing Tuesday.

The new administration can bring a fresh round of sanctions that were approved as part of the defense bill that was passed late last year.

“It would make sense to suspend completion of the project for a while,” Morningstar said. To “allow time for consultations to see if there is a solution that would eliminate any Nord Stream 2 threat to European energy security and would protect the interest of Ukraine.”

–With assistance from Brian Parkin, Dina Khrennikova and Daniel Flatley.