Around 1,000 European Union finance firms are expected to open their first offices in the UK after losing their passporting rights because of Brexit.

Roughly two-thirds of the 1,500 money managers, payment firms and insurers that have applied for regulatory permission to continue operating in the UK previously had no physical operations in Britain, according to Financial Conduct Authority records obtained by Bovill, a financial consultancy.

The firms “were operating on a services passport prior to Brexit, which means they did not have a permanent office in the UK,” said Ed O’Bree, partner at Bovill. “These firms are therefore likely to invest in real estate and professional services advice as they set up a UK office for the first time.” 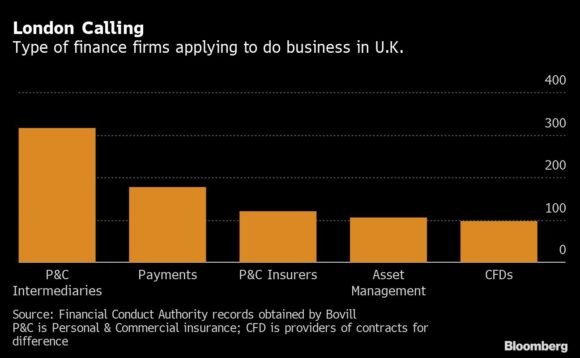 Irish, French and German companies together accounted for 584 of the 1,500 applications for authorization to do business in the UK Cyprus, which is a popular venue for trading platforms, was the next most common, with 151. The data show 100 retail and wholesale banks seeking to increase their presence in the UK, as well as over 400 firms in the insurance industry.

The numbers are in line with data from early last year when Bovill first published the data on firms. The influx is a potential boon to Britain’s finance sector, whose decades-long dominance of European finance is under threat after Brexit.

This year, London lost its crown to Amsterdam as Europe’s top place to buy and sell stock, traders have shifted interest-rate swaps out of the UK and the relocation of bankers into the bloc continues.