Long before Credit Suisse Group AG was forced to wind down a $10 billion group of funds it ran with financier Lex Greensill, there were plenty of red flags.

Executives at the bank knew early on that a large portion of the assets in the funds were tied to Sanjeev Gupta, a Greensill client whose borrowings were at the center of a 2018 scandal at rival asset manager GAM Holding AG. They were also aware that a lot of the insurance coverage the funds relied on depended on a single insurer, according to a report. Credit Suisse even conducted a probe last year of its funds that detected potential conflicts of interest, yet failed to prevent their collapse months later.

On Friday, the bank finally pulled the plug and said it would liquidate the strategy, a group of supply chain finance funds for which Greensill had provided the assets and which had been held up as a success story. The funds, which have about $3.7 billion in cash and equivalents, will start returning most of that next week, leaving about two-thirds of investor money tied up in securities whose value may be uncertain.

The decision caps a dramatic week that started when Credit Suisse froze the funds after a major insurer for its securities refused to provide coverage on new notes. The move sent shock waves across the globe, prompted Greensill Capital to seek a buyer for its operations, and forced rival GAM Holding AG to shutter a similar strategy. For Credit Suisse and its new Chief Executive Officer Thomas Gottstein, it’s arguably the most damaging reputational hit after an already difficult first year in charge.

While the financial toll on the bank may be limited, fund investors are left with about $7 billion locked up in a product that was presented as a relatively safe but higher-yielding alternative to money markets.

The Greensill-linked funds were one of the fastest-growing strategies at Credit Suisse’s asset management unit, attracting money from yield-starved investors in a region that had for years had to contend with negative interest rates. The bank started the first of the funds in 2017, but they really took off in 2019, the year rival asset manager GAM finished winding down a group of bond funds that had invested a large chunk of their money in securities tied to Greensill and one of his early clients, Gupta’s GFG Alliance.

The Credit Suisse funds, too, were heavily exposed to Gupta early on. As the bank ramped up the strategy, the flagship supply-chain finance fund had about a third of its $1.1 billion in assets in notes linked to Gupta’s GFG Alliance companies or his customers as of April 2018, according to a filing.

Credit Suisse executives were aware but denied at the time that it was an outsized risk, according to people familiar with the matter. They argued that most of the loans were to customers of Gupta and not directly to GFG companies, the people said, asking not to be identified because the information is private.

Over time, the proportion of loans linked to GFG and customers appeared to decrease, while new counterparties popped up in fund disclosures that packaged loans to multiple borrowers — making it harder to determine who the ultimate counterparty is. Many of the vehicles were named after roads and landmarks around Lex Greensill’s hometown in Australia.

The executives in charge of the fund also knew that much of the insurance coverage they relied on to make the funds look safe was dependent on just a single insurer, according to the Wall Street Journal. They considered requiring the funds to secure coverage from a broader set of insurers, with no single firm providing more than 20% of the coverage, but never put the policy in place, the newspaper said. 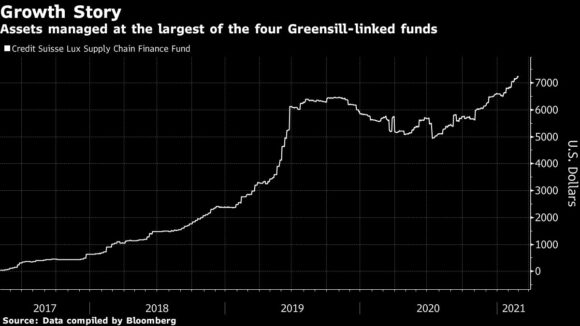 Greensill, meanwhile, was looking for new ways to fuel the growth of his trade finance empires after the collapse of the GAM funds removed a major buyer of his assets. In 2019, SoftBank Group Corp. stepped in, injecting almost $1.5 billion through its Vision Fund to become Greensill’s largest backer. It also made a big investment in the Credit Suisse supply chain finance funds, putting in hundreds of millions of dollars, though the exact timing isn’t clear.

Over the course of 2019, the flagship fund more than doubled in size, but soon questions arose about the intricate relationship between Greensill and SoftBank that fueled the growth. The funds had an unusual structure in that they used a warehousing agreement to buy the assets from Greensill Capital, with no Credit Suisse fund manager doing extensive due diligence on them. Within the broad framework set by the funds, the seller of the assets — Greensill — basically decided what the funds would buy.

Credit Suisse started an internal probe that found, among other things, that the funds had extended large amounts of financings to other companies backed by SoftBank’s Vision Fund, creating the impression that SoftBank was using them and its sway over Greensill to prop up its other investments. SoftBank pulled its fund investment — some $700 million — and Credit Suisse overhauled the fund guidelines to limit exposure to a single borrower. 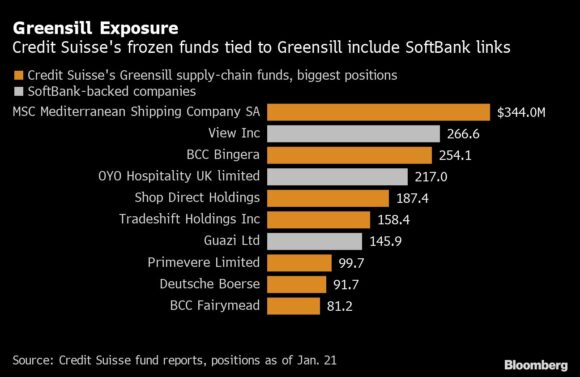 Credit Suisse’s review didn’t mention at the time that Greensill had also extended financing to another of his backers, General Atlantic. The private equity firm had invested $250 million in Greensill Capital in 2018. The following year, Greensill made a $350 million loan to General Atlantic, using money from the Credit Suisse funds, according to the Wall Street Journal. The loan is currently being refinanced, said a person familiar with the matter.

Shortly after the Credit Suisse probe concluded, more red flags popped up. In Germany, regulator BaFin was looking into a small Bremen-based lender that Greensill had bought and propped up with money from the SoftBank injection. Greensill was using the bank effectively to warehouse assets he sourced, but BaFin was worried that too many of the those assets were linked to Gupta’s GFG — a risk that the Credit Suisse’s managers, for their part, had brushed off earlier.

SoftBank, meanwhile, was quietly starting to write off its investment in a stunning reversal from a bet it had made only a year earlier. By the end of last year, it had substantially written down the stake, and it’s considering dropping the valuation close to zero, people familiar with the matter said earlier this month.

Credit Suisse, however, was highlighting the success of the funds to investors. Varvel, the head of asset management, listed them in a Dec. 15 presentation as an example of the “innovative” and “higher-margin” fixed-income offerings that the bank was planning to focus on. 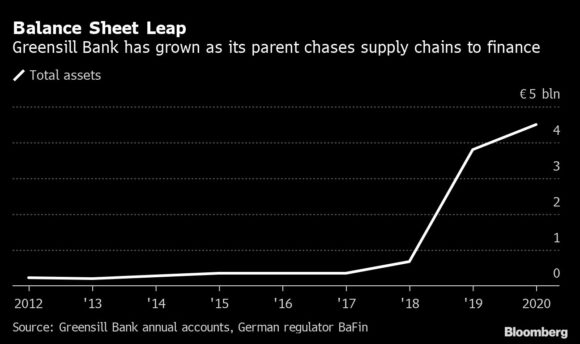 By that time, Greensill already knew that a little-known Australian insurer called Bond and Credit Company had decided not to renew policies covering $4.6 billion in corporate loans his firm had sourced. The policies were due to lapse on March 1, prompting a last-ditch effort from the supply-chain firm to take the insurer to court in Australia. That day, a judge in Sydney struck down Greensill’s injunction, triggering the series of events that have since reverberated around the world.

Credit Suisse didn’t know until very recently that the insurance was about to lapse, according to a person with knowledge of the matter.

In an update to investors Tuesday, Credit Suisse said that several factors “cumulatively” led to the decision to freeze the funds, and that it was looking for ways to return cash holdings. But in a twist that may complicate the liquidation of the remainder, it also said that Greensill’s German Bank was one of the insured parties and plays a role in the claims process, and that bank was just shuttered by BaFin.

Many of the assets in the funds have protection to make them more appealing to investors seeking an alternative to money market funds. Yet the second-biggest of them, the High Income Fund, doesn’t use insurance. It’s also the fund with the least liquidity, with less than 20% of the net assets in cash.

Credit Suisse has said it wasn’t aware of any evidence suggesting financial irregularities with the papers issued by Greensill or by the underlying companies. The bank still hasn’t commented on how many of the assets in the funds are tied to Gupta’s GFG Alliance.

–With assistance from Melissa Karsh.