Natural and man-made catastrophes cost the insurance industry US$89 billion in 2020, in the fifth costliest year since 1970, according to a report from Swiss Re’s sigma.

Of that total, US$81 billion related to claims from natural catastrophes, with the remainder ($8 billion) from manmade events, the report said. There were 189 natural peril and 85 man-made disasters during 2020.

The report once again highlighted the costs of secondary peril events, which accounted for more than US$57 billion, or 71% of total natural catastrophe insured losses, resulting mostly from severe convective storms and wildfires in the U.S. and Australia.

Global economic losses from these disasters were US$202 billion last year, up from US$150 billion in 2019, said the report. (Editor’s note: Economic costs are a combination of insured and uninsured losses). 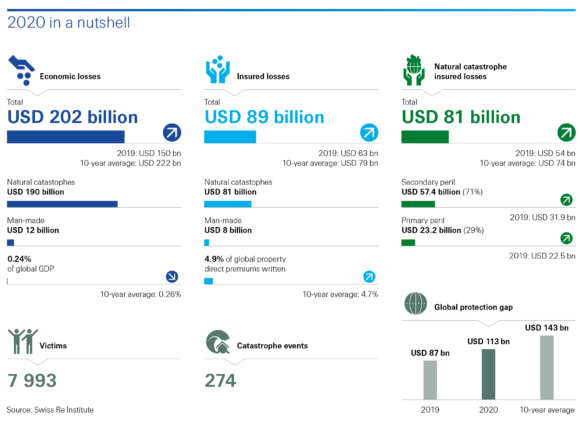 The report said that the number of man-made events fell to one of its lowest levels in 2020, reflecting the reduced economic activity and mobility due to lockdowns imposed to curb the spread of COVID-19. Even so, man-made losses were on par with 2019, as a result of two large events: the Beirut explosion and riots in the U.S. that led to property damage across 24 states, according to sigma.

Losses from primary and secondary perils have been rising since 1970, which are both affected by the same risk trends, including rapid population growth, increasing property values in exposed regions, and the effects of climate change.

As a result, future peak loss scenarios for both hurricane season and multiple secondary peril events could be as high as US$250 billion–$300 billion, the report said, warning that it is just a matter of time before such a severe scenario plays out in reality.

Hurricane Losses Could Have Been Worse

The 2020 North Atlantic Hurricane season was very active, with a record number of 30 named storms, which caused moderate insured losses of US$21 billion, said Swiss Re, noting that it was “down to luck” that the storms did not strike areas of high population and economic value concentration. (The previous record of 28 named storms was in 2005).

However, devastation from hurricanes was significant in Nicaragua, Honduras and Guatemala, as well as parts of coastal Louisiana in the U.S., battered by five storms – Cristobal, Laura, Marco, Delta and Zeta – which set another record.

The report emphasized that overall insured losses from the season could have been much more severe. “This is because the most intense storms struck Central America, a region with low insurance penetration, while the hurricanes striking the U.S. mostly made landfall in regions of less population and exposure.”

Top Photo: Destroyed buildings are seen on Aug. 12, 2020 from a room heavily damaged in a neighborhood near the site of the Aug. 4th explosion that hit the seaport of Beirut Beirut, Lebanon. Photo credit: AP Photo/Hassan Ammar.