“It’s really important that finance recruits from science,” said Velez, one of a growing number of campaigners and scientists who have switched to banking, which she hopes can play a role in “greening the polluting industries.”

Activism and finance may seem an unlikely pairing of two implacable foes.

Yet banks, asset managers and private equity firms, faced with tough regulations to decarbonize portfolios and loan books, are competing to grab the people with the right green expertise, according to jobs data and Reuters interviews with finance firms, recruiters and universities.

“Now they are pulling us in from the streets through the front door.”

Many environmentalists, for their part, say the only way to save the planet is to force big businesses to radically reduce their carbon emissions, and they see the finance world that funds them as one of the best levers.

Some charities and campaigners argue, though, that “greenwashing” is rife in the finance industry. Many new recruits, they say, are used as a marketing tool and often lack the power to drive real change.

Nonetheless, the green rush is on.

The number of job ads for “sustainability” roles nearly doubled to more than 1,000 during the year to February, versus the previous 12 months, according to global finance recruitment specialist eFinancialCareers. Positions range from junior-level analysts to new director-level roles such as head of sustainability or climate change. 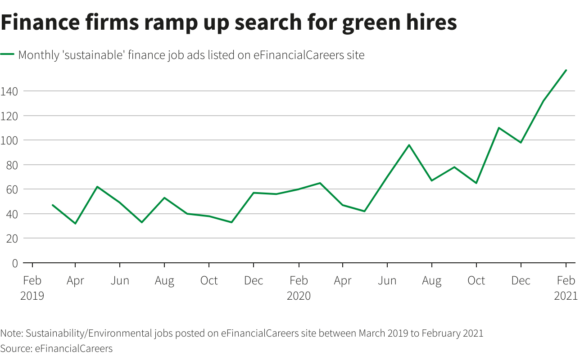 Green recruitment specialist Acre said its hires in finance had increased by more than a quarter year-on-year every year since 2017. The most senior posts now offer pay packages of well over 750,000 pounds ($1 million), up around three-fold over the period.

LinkedIn data shared with Reuters shows a steady increase in the number of finance jobs listed as requiring at least one “green skill,” such as pollution prevention or ecosystem management, particularly in the United States. 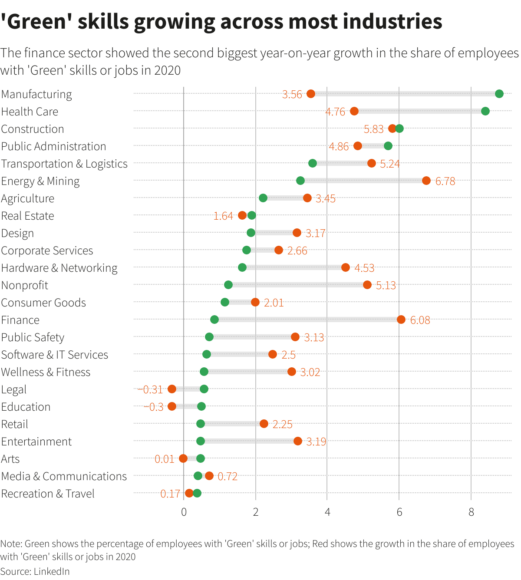 “There is a race for talent right now, there’s no doubt about it,” said Elree Winnett Seelig, Citi’s global head of ESG for markets, adding that demand was particularly strong in fixed income.

Indeed banks, asset managers and private equity firms have been ramping up their climate teams in the past year, pushing salaries up by 30-50%, said Jon Williams, partner in sustainability and climate change at PwC UK.

One of his team recently doubled their salary by jumping ship to an asset management firm, he added.

Environmental advocacy group workers who move to a bank are typically able to at least double their pay packets once bonuses are factored in, recruiters say.

Leading universities with specialist centers that combine climate science and finance say they have seen companies beat a path to their door to recruit graduates.

Charles Donovan, executive director of Imperial College London’s Centre for Climate Finance and Investment, which is jointly run by climate science hub the Grantham Institute, said there had been an “unbelievable” rise in interest in its students from finance sector employers in the past 18 months.

Banks such as HSBC and Standard Chartered are seeking prospective hires through climate-research partnerships, while some firms are offering scholarships, he added.

While the London financial district may be pulling some talent away from government and advocacy roles, Donovan was unconcerned, saying many who targeted the financial sector were “a different breed of students” who recognized the value of expertise in areas like climate change to differentiate themselves from other graduates looking for jobs in finance.

Some of the more established environmental experts who have moved across to finance say the rewards are not just financial.

“I can deploy the knowledge in a different way and working with different stakeholders is quite invigorating,” he said.

Some specialists are also drawn by the challenging and often highly technical nature of the work.

For example, quantitative analyst Velez, who moved to Lombard Odier last year, is building a tool that links assets to near real-time environmental and geospatial data tracking hurricane risk and pollution.

Swiss bank UBS, meanwhile, has recruited people for its Evidence Lab analyst team with experience across a range of disciplines including geomodeling and hydromodeling in recent years.

“We had to adopt new recruitment strategies and methods to find people with these skills who weren’t looking for a job in financial services,” said Barry Hurewitz, global head of UBS Evidence Lab Innovations.

Finance firms across the board told Reuters they were expanding scientific and sustainability teams.

Asset manager Schroders said it has more than 10 staff with scientific backgrounds in its insurance-linked securities team, including people with PhDs in climatology. Its sustainable investing team has grown by four people to 22 in the last year and is planning further expansion.

Britain’s biggest domestic bank Lloyds has more than doubled the number of staff with core sustainability roles in a year, to over 40, while Zurich Insurance said it had expanded its team researching the modeling of wind, flood, cyber and climate risks, to seven from one in five years.

‘Part of the Machine’

The demand for green expertise is partly being driven by tightening climate regulation on financial services firms in Britain, Europe and beyond.

Euro zone banks will be expected to take climate change into account when making loans or investing, for instance. Funds in the EU will have to disclose how sustainable their products are, while UK lenders could face tougher capital requirements for polluting assets held on their books.

“In my experience finance firms don’t have a great depth of knowledge across the piste. Their skill sets are massively tilted towards the past,” said Charlie Kronick, senior climate adviser at Greenpeace UK.

Better hiring must be matched by strategy changes at the top, according to the charities. While many large financial services firms have pledged to decarbonise their lending and portfolios in the coming years, most remain exposed to fossil fuels in some way, they say.

“If you just have a bunch of sustainability officers who are kind of shoved off to the side and are effectively there to help with greenwashing, that’s not going to really change the results very much,” said Ben Cushing, campaign manager for financial advocacy at U.S.-based environmental group Sierra Club.

And not everyone with an environmental background finds high finance fulfilling.

Ian Povey-Hall, a director at green recruiter Acre, said that while most had no regrets, some had become disillusioned.

“ESG becoming more of a commercial focus has changed things for some people who say their work has become productized as it’s become more part of the machine,” he said.

Lombard Odier’s Velez says she’s happy with her decision and satisfied she’s not part of a greenwashing problem.

“We are working a lot on how companies will decrease their emissions,” she adds. “Of course, I want these changes to happen faster – I am a bit more realistic than optimistic.”

Photograph: This Bigstock photo shows a dead tree in a dry field during a UK drought.