Whatsapp chat rooms and Telegram channels across Germany lit up in the early hours of April 29. Young people frantically exchanged messages in a tone that went from disbelief to surprise to euphoria.

The country’s highest court had just ruled that the government’s 2019 climate law was incompatible with fundamental rights, a victory for the nine young German activists that filed the lawsuit and for the global youth climate movement. Over the next few days, it also changed the course of Germany’s politics, economy and climate strategy for the next three decades.

“For us it has been rather shocking, we were surprised because we did not have so many expectations of winning,” said Nick Heubeck, a 22-year-old student and a spokesperson for the Fridays For Future movement in Germany, one of the organizations supporting the suit. “Much of what has happened over the past few days would have been completely unthinkable before the ruling.”

A week later, the German government announced it would speed up its transition to net zero greenhouse gas emissions by 2045 and cut emissions 65% by 2030. The goals will force industry to implement massive emissions cuts over the next decade and puts the country ahead of most other large economies in addressing climate change.

“We have shown it’s possible,” said Heubeck. “This sends a strong signal to all of the ongoing cases that Germany’s highest court understands it’s necessary to limit warming at 1.5 degrees Celsius.” 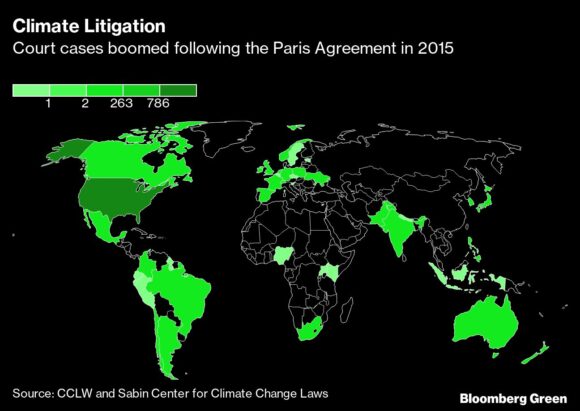 Climate litigation cases boomed after 189 countries signed the Paris Agreement in 2015, committing to limit global warming at 1.5°C or below 2°C by the end of the century. Of the more than 1,727 cases recorded between 1986 and 2020, over 50% started after 2015, according to a report in April. Many have been initiated by the same young activists that led mass climate action demonstrations in 2019.

Activists are not only challenging governments and their climate plans, but increasingly private companies too, according to Catherine Higham, a policy analyst at the London School of Economics’ Grantham Research Institute on Climate Change and the Environment.

Traditionally, climate cases on the private sector were brought against fossil fuel majors, but that’s changing, said Higham, who coordinates the Climate Change of the World Laws database. Almost every sector is being targeted, including dairy farming in New Zealand and insurance companies in Poland. They challenge everything from greenwashing to financial risk disclosure.

“The vast majority of cases is still against governments and that’s where the most major successes have taken place,” Higham said. “It’s important to remember there’s a real connection between the public and private sectors —cases against governments also have the potential to have an impact on the business environment.”

The flurry of cases is a result of years of mobilization by climate activists, but something is changing in courts too, said Gerry Liston, a lawyer at nonprofit Global Legal Action Network. Liston is currently coordinating a case in front of the European Court of Human Rights on behalf of six Portuguese activists, aged 9 to 22. The activists argue that their human rights are threatened because climate policies in 33 countries are not sufficient to meet the Paris target. In a rare move, the court granted priority to the case in November, forcing countries to respond to the claims by the end of this month.

In a sign that judges are getting creative in their thinking, they cited an article in the European Convention for Human Rights that plaintiffs hadn’t even thought about invoking—Article 3, which prohibits torture and degrading treatment. The article is most commonly used in cases of police abuse, but it has been invoked to argue in favor of inmates with chronic lung conditions who were exposed to smokers in prison, Liston said.

“An analogy can be made with the situation of people in the context of climate change,” Liston said. “They have nowhere to go and are facing an inevitable worsening of conditions.”

A favorable ruling by the court, which has the power to issue binding decisions, could force governments to change their climate policies. Getting there won’t be easy, Liston said. The five lawyers and 10 barristers working on the case face a long process, funding challenges and fielding a flood of documents once the responses from the 33 governments come in.

“The reality is that courts are responsive to what’s happening on the ground—certainly no legal decision is made in a vacuum,” Liston said. “The impacts of climate change, and demands for radical and rapid mitigation action are resonating with judges, too.”

Laura Millan writes the Climate Report newsletter about the impact of global warming.

Top photograph: Supporters of the Fridays for Future climate movement demonstrate outside the Chancellery, where earlier in the day the government cabinet met to agree on amendments to Germany’s climate protection law on May 12, 2021 in Berlin, Germany. Germany’s Federal Constitutional Court recently ruled that the current law is insufficient in protecting future generations from the consequences of climate change, giving climate activists, including the nine young plaintiffs who brought the suit, a big victory. However many activists are saying the new government commitment of climate neutrality by 2045 is not enough and are demanding the same goal but for 2035. Photo credit: Sean Gallup/Getty Images.