In court documents, NE2, a trading house for Canadian crude oil including the flagship Western Canada Select blend, says it was defamed as a result of allegations in a wrongful dismissal suit brought by Marc Bennett, its former head of North American energy. NE2 added the other departed employees to the counterclaim it filed this week, saying they tried to steal business from the firm.

The former employees’ actions “have irreparably harmed NE2’s reputation, goodwill and market share within the crude oil trading industry in North America,” Calgary-based NE2 says in its suit, which names Bennett and seven other people as defendants.

All three filings — Bennett’s initial lawsuit and NE2’s defense and counterclaim — depict a company torn apart by workplace tension. NE2’s court filings say that Gunn, who also owns the firm, was attempting to implement cost controls to rein in “bloated incomes” and “exorbitant expense accounts,” including nixing plans for a golf simulator in the office.

The firm denies harassment in its statement of defense and counterclaim. It alleges that Bennett and another former executive, Mandy Burgess, and six oil brokers took part in an “unlawful conspiracy to harm the reputation of Mr. Gunn and NE2,” causing NE2 to suffer “substantial damages.”

Bennett responded to NE2’s claims in a written statement to Bloomberg News: “I deny the allegations made against me as they are false, sensationalized and misleading which will be proven in the litigation process.” He confirmed that he had seen NE2’s filing and said he remained unemployed.

Widmer declined to comment. Douglas and See said they weren’t currently employed and declined to comment further. Contact information for Beckwermert wasn’t available, and Burgess and the remaining former employees named in the lawsuit didn’t respond to requests for comment.

The turmoil at NE2 has caused oil traders to exit a key contract used to hedge Canadian heavy crude. Open interest on the contract on CME Group Inc. hasn’t recovered since the brokers quit over the Easter weekend in April. 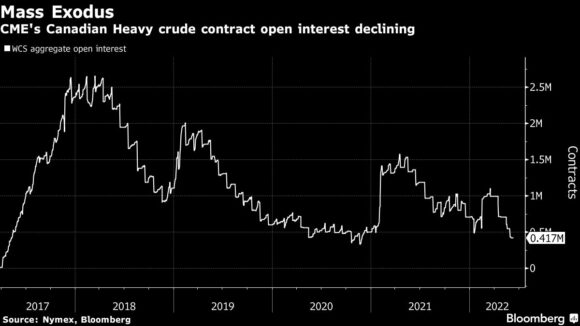 NE2 said in the court filings that the former employees “exaggerated and fabricated” instances of harassment in a “smear campaign” and planned to hurt the company and take its clients to a new or competing firm. It also accused the ex-employees of violating their employment agreements by soliciting business from NE2 clients.

Gunn, through a spokesman, declined to comment on the legal battle.

Photograph: An oil pumping jack, also known as a “nodding donkey”, in an oilfield near Neftekamsk, in the Republic of Bashkortostan, Russia, on Thursday, Nov. 19, 2020. Photo credit: Andrey Rudakov/Bloomberg.