The European Union agreed to put a price cap on Russian oil at $60 a barrel, paving the way for a wider Group of Seven deal, according to a Polish diplomat.

The price is higher than where Russia already sells most of its crude. That’s because one of the main aims of the measure is to try to keep Russian oil flowing to global markets. But it’s less generous than an earlier proposal after pressure from Poland and the Baltic countries.

After long negotiations, those countries succeeded in securing additional conditions aimed at punishing Moscow, including a mechanism that would allow for revisions of the price every two months, There’s also a plan to make sure any resetting of the cap should leave it at least 5% below average market rates.

The focus now turns to how the Kremlin reacts.

Diplomats have been trying to find a level that’s attractive enough to Moscow so that it keeps selling. If it’s above the market rate — as it now is — Russia and its buyers can argue it’s simply business as usual. Foreign Minister Sergei Lavrov indicated on Thursday the price cap level was irrelevant.

The risk for oil markets is that if the cap is set too low, Moscow may make good on a threat to shut down production — sending global oil prices higher.

The US first proposed the cap as there were concerns in Washington that EU sanctions were so strict they would cut off Russian supply and cause a massive spike in global oil prices. The cap provides an offramp, allowing buyers adhering to it to access the insurance and shipping services that EU sanctions would otherwise prohibit.

The US plan was then adopted in principle by the G-7 — with the details still to be hashed out.

As Russia is already selling its crude at a discount, the cap is higher than the price of the country’s flagship grade — known as Urals — which fell as low as $45.31 a barrel this week at the Baltic Sea port of Primorsk, according to Argus Media, one of the market’s two preeminent pricing companies. It rose to $48.04 on Wednesday.

Russia has said it won’t sell to anyone signing up to the price cap. But as the G-7 is mostly stopping Russian imports, the cap is aimed at buyers like India, China and Turkey. Those countries haven’t signed up, but that doesn’t stop them buying oil below the cap and accessing the crucial shipping services.

The price cap includes a mechanism that would allow for regular evaluations and potential revisions of the price every two months from mid-January 2023, as well as a provision to commit future revisions of the threshold to at least /5% below average market rates. 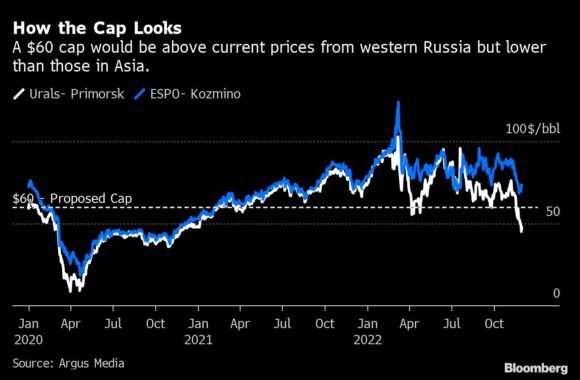 It also introduces a 45-day grace periods for vessels at sea that loaded their cargo before Monday, giving them until Jan. 19 to unload the oil, as well as a 90-day transition period for any future change in the price level.

Diplomats have been under pressure to nail down the cap plan before EU sanctions on seaborne Russian oil kick in Monday. Once the EU deal is formally adopted, it needs to be approved by the G-7. One person familiar with the matter said $60 was withing the G-7 range.

Most G-7 nations will stop importing Russian crude by the end of this year. An EU ban on other refined petroleum products originating in Russia is due next February, alongside a cap on those goods.