It’s no secret that the insurance industry is facing a huge talent gap. Almost half of all insurance professionals are over age 45, with 25 percent of the industry expected to retire by 2018. That’s a concerning trend for the property/casualty industry overall but one that could spell opportunity for young agents.

In fact, the aging of the insurance industry is one reason young insurance professionals project a bright and secure future for themselves in the industry. According to Insurance Journal‘s 2016 Young Agents Survey, their optimism is higher today than it has been in recent history.

Young agents are optimistic not only about their own careers but also about the U.S. economy and even about the ability of their own agencies and the industry to attract quality talent, according to feedback from the more than 500 young agents responding to this year’s survey. 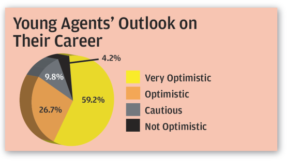 “There is job security in the industry if you find the right place to work because of the shortage of agents,” said one agent.

“I believe that the insurance industry is a great way to start a career,” said another young agent responding to the survey. “You’re always learning and a lot of individuals will be retiring. Who will replace those people? Young insurance agents!”

Nearly 60 percent of young agents described their outlook on their career as “very optimistic,” which is up from 51.6 percent in 2015.

The survey identifies what young agents do to advance their careers, what they earn, as well as what they think about their careers and their agencies’ operations and cultures.

Overall, young agents feel confident that the industry and their own agencies will attract quality talent to fill the talent gap in the coming years. 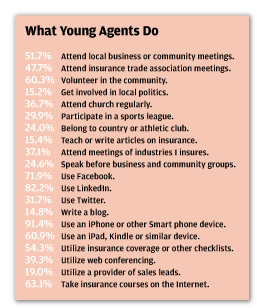 A millennial agent described the property/casualty industry as “one of the top industries” for young people to consider. “The industry is just starting its technology revolution and recognizing the value that young professionals can bring in that space,” she said.

More young agents (32.1 percent) view the independent agency channel’s ability to advance in technology as “very optimistic” in 2016 compared to 2015 when just 22.7 percent took that view.

Even young agents’ outlook on their future earning potential is improving, according to this year’s survey. The survey found young agents feel more confident about their ability to grow their income and market share in both personal and commercial lines in 2016. 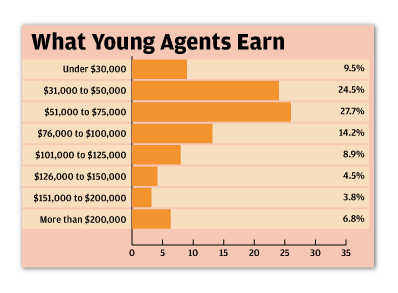 “No better place to be rewarded financially and relationally than in our business,” said a young agent. “You must work, but you will be rewarded for results.”

The potential to grow and the freedom that comes with the job were reasons cited most often by young agents in the survey when asked if they would recommend a career in insurance to other young people.

“I would definitely recommend a career in insurance for a young individual,” said one respondent. “It’s a great way to build residual income, freedom and a life for your future family.”

One young agent said starting her career at a tech startup company opened her eyes to the value of the independent agency channel.

“Most young people don’t realize/care about stability,” she said. “They go after the fun, fancy bells and whistles. Working in an industry and company that will still be around in 20 years from now is important to me. The youth needs to learn to appreciate why working for a growing, stable company can benefit them. There is a lot of growth opportunity in this industry.”

Matthew Peterson, 38, president of Marlton, N.J.-based Mills Insurance Group, is one agent who is happy he chose insurance. Peterson entered the insurance world right after college.

Peterson graduated from West Virginia University shortly after Sept. 11. “There was a lot of uncertainty about the economy at that time,” he said. He wanted a career that offered more stability than his own father’s industry – manufacturing. 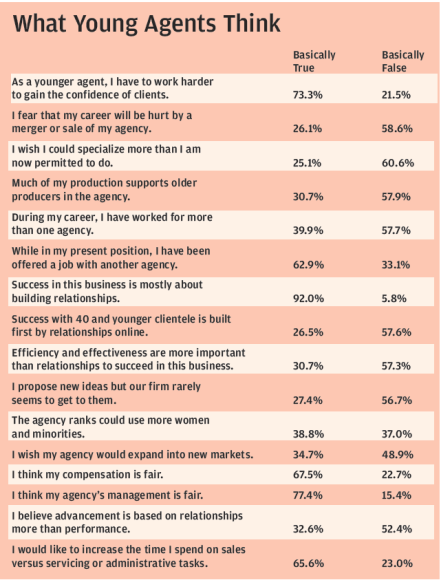 “I really wanted to be in a business that I was not going to be squeezed out of because of efficiency … the way manufacturers cut out middlemen by going direct. They cut out reps, which is what my father did,” he said. Seeing his father’s career struggles left an impression on Peterson.

“I wasn’t born into insurance, I didn’t fall into it, I chose it because I wanted an industry that could be stable,” Peterson said.

He decided to first obtain a claims adjuster license but during his first insurance class he came to realize the agency side of the business would be the right choice for him.

“After I was done with that class, I was convinced that I wanted to go on to the agency side of things,” he said. “It all came to me: you can’t operate a business, you can’t drive a car, you can’t own a home” without insurance.

He started his insurance career with an agency in south Florida. Peterson attributes his success during those first years to having a great mentor. Even now as an agency owner, Peterson believes a great mentor can be the difference between producer success and failure: “That’s something at our firm we believe in now, developing talent, learning from somebody that is doing it right.” 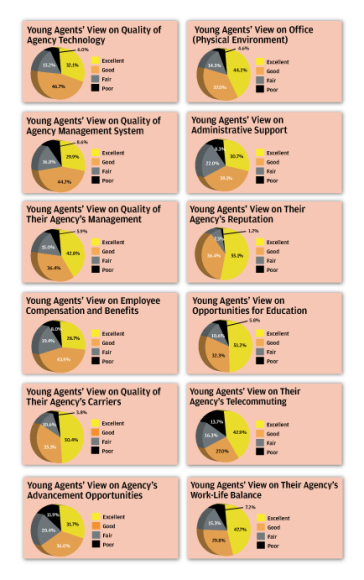 “Dealing with things like wind, large property schedules,” he said. “Those things made me fall in love with the insurance world, too, because you could be young, and if you worked hard, and were committed to your craft and education, you could make money.”

In addition to stability, residual, income was important to Peterson.

One young agent wrote in the survey: “I am my own boss but I don’t have to manage anyone but myself. … I also have complete flexibility with my schedule and unlimited vacation time. A lot of agents work three days a week, some take month-long vacations; it’s the type of industry that if you make enough money you can do that.”

Another said what he enjoys most about being an agent is flexibility: “I have the flexibility to set my own schedule and build my business. I am building a business within a business with no start-up costs, I don’t pay overhead, I don’t have to hire and fire anyone, but I have all the support I need.”

Peterson believes there are plenty of opportunities for aggressive, honest, well-rounded, smart business people in the agency world.

“If you do a good job taking care of your clients, you could basically hold onto that client for a long time and continue to get paid for that account,” he said.

This is an edited version of an article that was originally published in Insurance Journal Magazine, April 4, 2016.