Of the major industries for which the Bureau of Labor Statistics reported workplace fatality rates for 2018, truck transportation was the most dangerous, with 28 deaths per 100,000 full-time-equivalent workers.

To be sure, there are jobs more dangerous than driving a truck. Dig down a bit deeper into the BLS data, which were released in December, and one finds fatality-rate estimates of 67.5 per 100,000 full-time-equivalent workers for fishing, hunting and trapping, and 64 for logging (both are part of the larger agriculture, forestry, fishing and hunting category in the chart above), albeit with double-digit margins of error because the number of workers involved is so small.

The agency also reports fatalities by occupation, thus counting truck drivers who don’t happen to work for trucking companies, while separating out the people who work in the logging company office from the ones actually cutting down trees. The latter job is seriously dangerous, with 97.5 occupational fatalities for logging workers per 100,000 full-time-equivalent workers in 2018, give or take an error margin of 26.8. The other highest-risk occupations were fishers and related fishing workers at 77.4 (plus or minus 23.9), aircraft pilots and flight engineers at 58.9 (12.4), roofers at 51.5 (8.4), refuse and recyclable material collectors at 44.3 (10.2), and driver/sales workers and truck drivers at 26 (0.9).

So “Deadliest Catch” is not an inaccurately titled TV series, cutting down big trees and climbing up on roofs are as dangerous as they look, flying in small aircraft (noncommercial flights were responsible for 97% of aircraft-related fatalities in 2018) may be more dangerous than it looks, and you should be nice to your garbageman. But trucking is of an entirely different scale than any of those industries or occupations: There are about 1.5 million people working in the truck transportation industry, and 3.6 million driver/sales workers and truck drivers (of whom 1.8 million drive heavy-duty tractor-trailer trucks). Driver/sales workers and truck drivers account for 2.3% of the workforce, and 18.4% of occupational fatalities.

Also, trucking is not just dangerous for the truck drivers. In fact, about 80% of the fatalities in road accidents involving heavy trucks in recent years have been people not in the trucks. 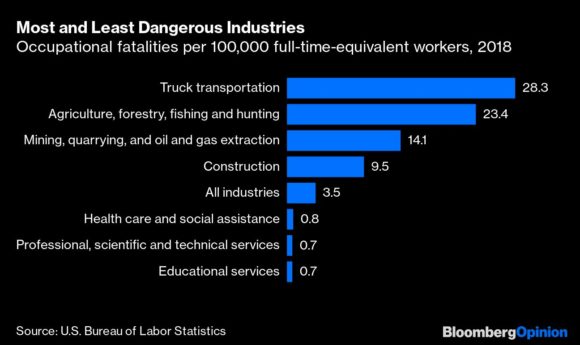 Clearly, what we need to do is ban trucking. Think of all the lives that would be saved!

Think of all the things that wouldn’t be delivered, either. The U.S. economy would grind to a halt without trucks. Also, trucking-related fatalities are down 36% since 1980, even as the annual miles traveled by large trucks almost tripled. Large-truck-related fatalities do make up a larger share of overall traffic fatalities than large trucks do of vehicle miles traveled, but the disparity isn’t huge (10.8% versus 9.2% since 2010). And small-vehicle drivers are probably responsible for more of the fatal accidents in the above chart than the truck drivers are — at least, they’re much likelier to have elevated blood-alcohol levels and past license suspensions or revocations.

Still, the occupational fatality data are a useful reminder that moving things around in big trucks remains more dangerous than anything else that large numbers of people in the U.S. regularly do. Consider the 2018 fatality rates for other transportation industries (air transportation’s low fatality rate might seem a head-scratcher given how dangerous it is to be a pilot, but again that’s the difference between super-safe commercial aviation, which employs the vast majority of people in the industry and flies the vast majority of the passengers, and riskier general aviation):

It looks like a canal-based freight transportation system like that of the 17th-century Netherlands would be much safer than a truck-based one. But we don’t really have the canals for that here in the U.S. (and they’ve even filled in a lot of them in the Netherlands). We also don’t have a nationwide system of pneumatic tubes for moving stuff around, even though that would be awesome. We do, however, have perhaps the world’s best freight-rail network, which in has recent years rivaled trucking in ton-miles of freight carried, although it’s still way behind on a dollar-value basis.

Trains, like trucks, are generally much more dangerous to those outside of them than those inside. In 2018, according to the Federal Railroad Administration, 795 people died from being hit by trains at grade crossings or while trespassing on tracks, and an additional 266 committed suicide by jumping in front of trains. But that still adds up to only about a quarter as many people as were killed in accidents involving large trucks.

Railroads have been pitching customers for a while with the argument that moving freight by rail is more environmentally friendly than doing it by truck; maybe they ought to add that it kills fewer people, too. In 2015, the Congressional Budget Office did factor in accident risk (along with pavement damage, traffic congestion and emissions) in an evaluation of the external costs imposed by trucking, which it estimated at eight times higher on a ton-mile basis than those imposed by freight rail. Taxes paid by the trucking industry come nowhere near covering those costs, meaning that trucking is effectively subsidized by current transportation and tax policy to the tune of tens of billions of dollars a year. This seems counterproductive.

Still, there are lots of places trucks can get to that trains can’t. They cover the crucial last mile, and lots of miles in between. They remain indispensable. So how can they be made safer for their drivers and everybody else?

One possible solution that’s gotten an awful lot of attention in recent years is self-driving technology. Autonomous trucks could be much safer than trucks driven by error-prone humans, although to get the full safety benefits all the other vehicles on the road will have to be self-driving, too. I suspect that something along these lines is in our future, but that future seems further away than it did a couple of years ago. Plus, I sympathize with the millions of truck drivers who would rather have a job with a somewhat elevated fatality risk (the death risk from driving a truck for a year is about a hundred times smaller than the latest estimates of the death rate for those who contract the novel coronavirus) than no job at all.

A more immediate concern is the age of truck drivers. Those 65 and older are somewhat overrepresented in the ranks of driver/sales workers and truck drivers (they made up 7.7% of that category last year versus 6.6% of the overall workforce), and long-haul truckers appear to skew even older. Drivers of all kinds of vehicles do not appear to be any more crash-prone in their 60s than at younger ages, but accident rates per mile traveled do start to rise for drivers in their 70s and really take off for those in their 80s. So there is something to be said for imposing a mandatory retirement age or at least tougher licensing requirements on truckers ages 70 and up.

The biggest issue may be that U.S. roads in general are much more dangerous than they need to be, with the fatal-accidents-per-vehicle rate now significantly higher here than in other rich countries (the gap is even bigger if you calculate the rate as a share of population, but this seemed like the more appropriate metric for comparison):

One explanation for this disparity is differences in urban and road design. Another is that U.S. speed-limit, seat-belt and drunken-driving laws are both more permissive than those of most other rich countries and much less strictly enforced and observed. Hey, we value our freedom! I wonder if we might be overvaluing the freedom to die in a truck accident, though.