Already, 2022 is taking its place in a pantheon of years that have seen the nature of fire change — and all parts of the world fall under threat. It’s only expected to get worse, with drought and heat waves looming over the horizon for many parts of the globe.

At the epicenter of the fury will be the US West, where the decades-long megadrought has led to an “aridification,” according to Daniel Swain, a climatologist at the University of California, Los Angeles. So far this year, more than 24,000 fires have burned across the US, the highest in at least 10 years, National Interagency Fire Center data show.

That includes a fast-moving wildfire that ripped through a town in California’s Orange County in the past week, spurring nearly 1,000 evacuations and destroying homes in the wealthy enclave. In Colorado Springs, blazes killed a woman at a mobile-home park Thursday and forced the city’s airport to briefly close. On Friday, crews battled huge flames in Michigan.

The scariest part of all of this — it’s only May.

How Fire Season Is Evolving Into `Fire Year’

While living in the West has meant coming to terms in some ways with living in a danger zone, blazes are arriving earlier in the year and staying later. Flames have scorched nearly 1.3 million acres across the country since January, reaching into places where they wouldn’t be expected to occur until months from now.

Just before the New Year in Colorado, a wildfire ripped through a suburban area, destroying more than 1,000 buildings. In California, Santa Ana wind season in October and November typically fueled flames. Instead, there’s been burning all winter and spring, made worse by the drought, Joe Tyler, director for California’s Department of Forestry and Fire Protection, commonly known as Cal Fire, said in a recent press conference.

“We are no longer in a fire season — we are in a fire year,” Tyler said.

On top of the most immediate threat to life, there’s likely to be profound devastation to homes and property, and with it, economic shock.

In an average year, flames can cause about $50 billion in damage globally, said Chuck Watson, a disaster modeler at Enki Research. But if even just one country has a bad year for fires, that total can easily rise to $200 billion or more. This year, it’s supposed to be bad in a lot of countries.

Record blazes have already raged out of control in both the Northern and Southern Hemispheres, sweeping across Argentina, Paraguay, Venezuela and Colombia, along with the US West.

“We are absolutely entering a new era of fire activity,” said Jacquelyn Shuman, a project scientist with the National Center for Atmospheric Research in Boulder, Colorado, which itself was the site of a wildfire in March.

In fact, Swain of the University of California says the climate in the US West is so permanently changed that it no longer makes sense to call the situation a drought. Instead, he says, it’s just a new, much dryer, landscape.

“We are sort of entering into this ever-evolving new normal,” he said. “Every year, we say how can it possibly get worse — and then it gets worse.”

These aren’t just the typical blazes that have smoldered for centuries. As the nature of fires has changed along with the climate, they burn more intensely and have become harder to fight. And with population spread, more lives and homes are under threat than ever.

“These fires nowadays, they are not big and bad — they are big and evil,” said Jon Elfers, chief of Beaver, Oklahoma’s 20-member volunteer fire department that helped battle a 20,000-acre blaze in April.

Brett L’Esperance, chief executive officer of Dauntless Air, a squadron of firefighting airplanes, can attest to the extraordinary change. Normally, Dauntless pilots would be flying training missions in Texas in March, but this year they were out bombing fires with gallons of water.

“We have been in Texas earlier than we have before,” said L’Esperance, who used to work in private equity before buying the company. “We have never gone in that early. The shoulders of the season are getting more and more broad.”

With the rise of extreme fires, costs to fight them have soared.

In the last five years, the US has spent an average of nearly $2.4 billion just fighting fires on federal lands, according to the National Interagency Fire Center. That’s about 25% more than the 10-year average of $1.9 billion.

And while costs vary year-to-year, the overall direction is clearly marching higher. National firefighting never exceeded $1 billion until 2000, but since then, the figure has only dropped below that mark four times, and it topped $2 billion for the first time in 2015.

“In terms of frequency and severity, the trend is pretty clear,” said Jessica Waters, vice president of climate and structural resilience at commercial-insurer FM Global. 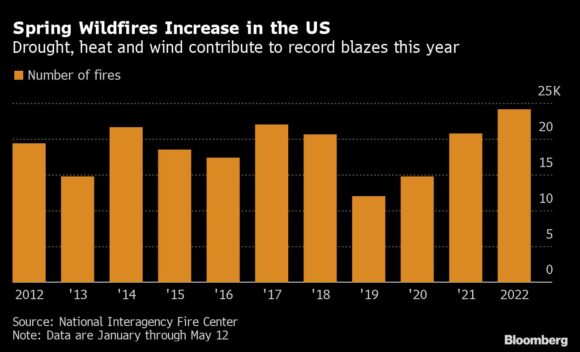 The number of global wildfires is expected to jump 14% by 2030 and 50% by the end of this century, the World Meteorological Organization, an arm of the United Nations, said in February.

Climate change contributes to the increased frequency and intensity of blazes in a number of different ways.

New weather patterns are driving increased wind speeds, while also contributing to lower humidity, decreased rainfall and higher temperatures, which all combine to make wildfires more prevalent, according to paper by researchers led by Adam J. P. Smith published in ScienceBrief in 2020.

The nights have also gotten warmer, making fires worse. In years past, humidity would rise at night, taking the edge off a blaze and giving firefighters a chance to catch up. Now, blazes burn with similar intensity day and night.

Humans have also made things worse in other ways. The decades-old practice of immediately suppressing fires upset the natural cycle that burned off underbrush and dead plants. This has left many forests across the US full of fuel ready to burn. In recent years, though, there have been some reversals to this policy. Last year, for example, California announced it planned to clear out 1 million acres a year.

Then there is population growth. Across the US West, steady expansion means every flat piece of land has been used up. The only alternative is to push into the hills and mountains, Bove said. That puts more people and structures into fire-prone places. And many of these homes are in coveted areas and can often feature multimillion-dollar price tags.

Or as Waters of insurer FM Global puts it: “We are putting more value at risk.”

The intense dryness across the West will continue to make things worse. Across the nine states that make up the US Drought Monitor’s western zone, drought covers more than 90% of the land, including all of Nevada and Utah, and more than 99% of California. More than 98% of New Mexico and Arizona are also parched.

In California, six of the seven largest fires in the state have occurred since just 2020. The evidence is clear across Oregon as well. From 2000 to 2011, there was only one year where wildfires burned more than 600,000 acres, but from 2012 to 2021, there were six, said Kendall Biggs, a senior fire investigator at EFI Global Inc., a engineering and investigation company owned by Sedgwick.

Drought, lower humidity and strong winds will lead to more potential for ignition, Biggs said. “The next big conflagration may be right around the corner.”

–With assistance from Mark Chediak.

Photo: Damaged vehicles in driveways of homes that were burned during the Marshall Fire in Superior, Colorado, on Jan. 2. Photographer: Chet Strange/Bloomberg

To contact the authors of this story:
Brian K Sullivan in Boston at bsullivan10@bloomberg.net
Vincent Del Giudice in Denver at vdelgiudice@bloomberg.net