When Warren Buffett told Berkshire Hathaway investors that State Farm continues to dominate the large auto insurance carrier landscape during this year’s annual meeting, he was referring to scale rather than customer satisfaction scores.

But State Farm wins on that front too, according to a Carrier Management analysis of customer satisfaction rankings published by J.D. Power last month in the J.D. Power 2022 U.S. Auto Insurance Study.

The J.D. Power study provides satisfaction ratings for individual carriers in 11 regions of the country—with anywhere from seven to 13 carriers listed for each region. Satisfaction is measured on a 1,000-point scale, with an average rating of 834 measured for the industry overall, according to J.D. Power.

State Farm’s regional customer satisfaction scores ranked among the top three carriers in seven of the 11 regions studied, with one first-place ranking (in the Southwest), four second-place spots and two third-place finishes. GEICO’s scores came in the top three in just four of the 11 regions, and the highest finish for Berkshire’s personal auto insurer in any region was a third-place ranking. 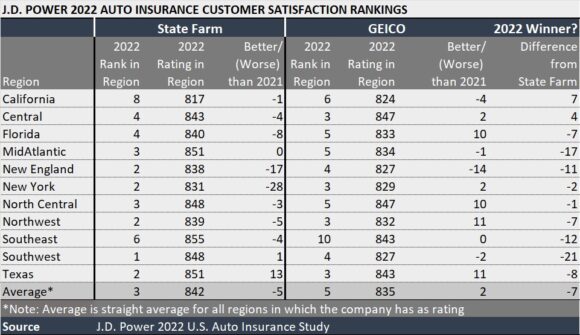 During the Berkshire annual meeting, Buffett suggested that State Farm’s ownership structure as a mutual insurer rather than a stock company had something to do with its dominance in terms of growth and overall size. An analysis of J.D. Power customer satisfaction ratings along those lines seems to bear that out, with mutuals generally overshadowing stock insurers. 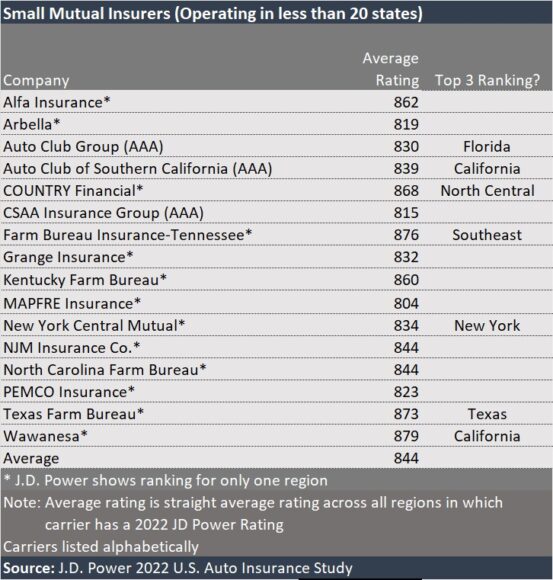 Excluded from the tally above are reciprocals Erie Insurance, Farmers and USAA. As in past years, J.D. Power does not include USAA’s off-the-charts satisfaction scores in its regional rankings. In the past reports, J.D. Power has explained that USAA is not ranked due to the closed nature of its membership.

When J.D. Power announced the release of the J.D. Power 2022 U.S. Auto Insurance Study in mid-June, the focus was not on stock vs. mutual or big vs. small. Instead, the headline of the media statement was “Usage-Based Auto Insurance Takes Center Stage as Satisfaction Flatlines.”

The flatlining description refers to the fact that overall customer satisfaction with auto insurance providers is 834 in 2022, almost a replay of 835 a year ago. Region by region, results for both years were similar as well. Below, we display the region average from the J.D. Power 2022 and 2021 report as well as the 2016 report, illustrating that the big jump in satisfaction over 2016 stalled in 2022.

“The current situation is a tough one for auto insurers, but it is not impossible in the current inflationary environment to build customer satisfaction and retention,” said Robert Lajdziak, director of insurance intelligence at J.D. Power, in a media statement. “J.D. Power finds two bright spots in the data for insurers. First, those insurers that are transparent and notify customers in advance of price increases can blunt the negative effects of a price increase. Second, usage-based insurance is growing quickly, with an all-time high number of customers adopting these programs and due to their experience using them, overall customer satisfaction levels have significantly risen.”

In addition to talking about State Farm during several annual meetings for Berkshire Hathaway, Buffett and Vice Chair Ajit Jain routinely compare Berkshire’s auto insurer with Progressive—noting that Progressive is way out in front of GEICO on rolling out usage-based insurance policies based on telematics technology and highlighting Progressive’s superior ability to match rate to risk.

Meanwhile, Progressive and another telematics leader—Allstate—have been telling their investors about aggressive moves they’re making to raise insurance prices in response to inflation trends. (Related articles, “Why You May See Less of Progressive’s Flo In Your State” and “Rate Hikes, Telematics, Data Science Leading Allstate Back to Profit” and “Telematics Has Kept It’s Promise: Allstate’s Journey Continues“)

Relative customers satisfaction scores suggest that price may be weighing Progressive’s scores down more than delight with telematics is picking them up. Progressive’s 2022 customer satisfaction scores are lower than GEICO’s in every region included in the J.D. Power report. In addition, Progressive’s scores are down anywhere from 7 to 35 points from 2021 in all but one region. For the only region in which the score increased this year—the Northwest—the jump was only 2 points. 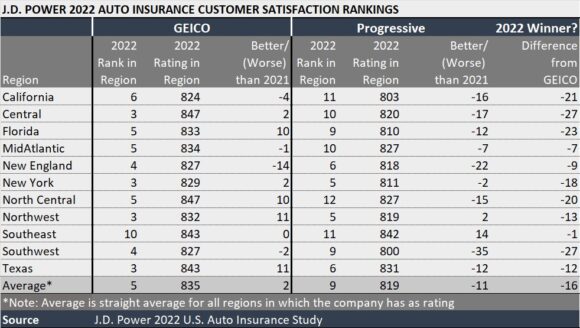 Among large stock insurers, Progressive posted the second-lowest average score customer satisfaction score across all regions (calculated as the straight average of 11 regional scores by Carrier Management). Only Kemper has a lower score—the lowest score recorded in the report—748 in the state of California. 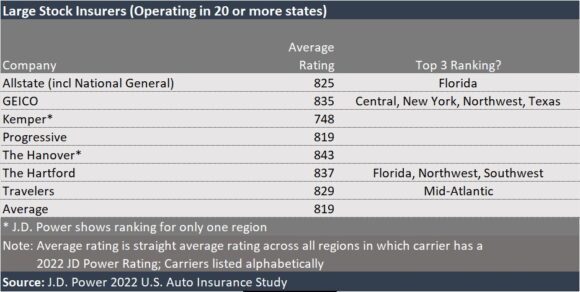 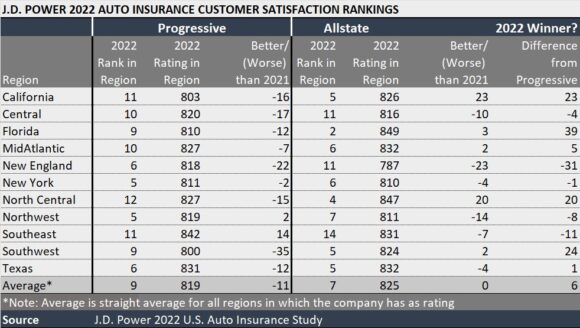 Although Allstate saws its regional customer satisfaction score rise in California, a review of the bigger picture of regional averages set forth in the J.D. Power report reveals that auto insurance carriers generally had to work hardest to please customers in California and New York.

Ratings vary widely by region, with drivers in California scoring carriers 29 points lower, on average, than car owners in the Southeast—the area with the most satisfied auto insurance customers.

Still, even though the regional average rating for California is a 820, Wawanesa garnered a score of 879 there—the highest score for any carrier in any region in the study. Ranked No. 1 among 13 carriers whose ratings are listed by J.D. Power for California, Wawanesa’s score is a 131 points above the lowest-ranked carrier (Kemper)—making the spread of ratings from best to worst the largest range of scores in any region studied.

The spread of ratings is tightest in New York—the home of the next most dissatisfied group of customers—where New York Central Mutual’s 834 rating outpaces the average for seven insurers writing in New York by 12 points and the worst score (for Liberty Mutual) by 36 points.

In the region with the most satisfied customers—the Southeast—the regional average for 16 carriers came in at 849, with Farm Bureau Insurance-Tennessee, Auto-Owners Insurance and Erie Insurance leading the pack.