A new $4 million study will look at two ideas that have been proposed as ways to protect the Houston area from hurricane storm surges that could cause billions of dollars in damage and wreak havoc on the largest petrochemical complex in the country.

One idea is a system of levees and flood gates that would run from Galveston to High Island, dubbed the “Ike Dike.” The other is a 600- to 800-foot wall that would be placed across the 52-mile Houston Ship Channel.

The ideas were developed after Hurricane Ike devastated the upper Texas coast in 2008, the Houston Chronicle reported. 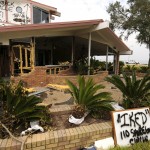 A series of public meetings in late spring will be held to discuss both proposals and determine what, if any, storm surge remedies should be pursued to protect the Houston area.

Former Kemah Mayor Bill King, who served on a gubernatorial commission convened to study the aftermath of Ike, is among those who have criticized local officials for a lack of action on a storm-surge protection plan. Ike was Texas’ costliest storm.

Leaders of the so-called Gulf Coast Community and Protection District, which was formed in 2010 to figure out how to proceed, have blamed the delay on lack of funding.

Now, they say they have directed engineers to approach the study objectively, with no preconceived notions.

“Our goal is not to re-create anything that’s been done, but to work with local officials to take what’s been done and build what would be a consensus plan,” said former Harris County Judge Robert Eckels, president of the protection district.

The Ike Dike was proposed by Texas A&M-Galveston professor William Merrell. Supporters believe it would protect coastal communities and refineries near the Houston Ship Channel. But it has been snubbed by others for its hefty price tag – an estimated $4 billion to $6 billion – and its possible detrimental impact on the environment.

The competing plan was developed by Rice University. Supporters of the project, dubbed the “Centennial Gate,” say that it is more environmentally friendly and that the $1.5 billion cost would be cheap enough to build it without federal funding.

In her inaugural address earlier this year, Houston Mayor Annise Parker called for a project to shield the coast from hurricanes and pledged to convene a meeting to push the issue “if no one else does.”

“There’s a lot of conversations,” Parker said. “No one seems to be stepping up.”