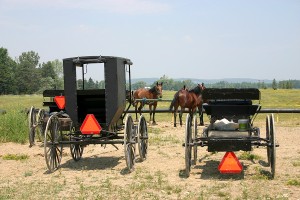 On Jacob Gingerich’s farm in western Kentucky, there is no phone or electricity for his family of 12 children. He even sees putting an orange safety triangle on their black horse-drawn buggy as a violation of the simple and pious life his Amish faith requires.

He and other Amish men in rural Graves County have become scofflaws for not using the reflective signs, ignoring state law, disobeying orders from a judge and even going to jail for not paying fines.

To Gingerich and others in the conservative Amish community known as Swartzentruber, using the bright reflective symbol amounts to blasphemy. They consider it garish and believe they should rely on God, not symbols, for protection on the highway.

“We try to lead a simple, plain life,” Gingerich said from his workshop as blue and navy shirts and pants fluttered on a clothesline outside. “Putting that orange triangle on the back of our buggy would not leave our buggies plain anymore.”

He and seven other Amish men were sent to jail in September for a few days for refusing to pay fines related to vehicle sign violations. A ninth Amish man avoided jail time when a local resident paid his fine. At least two other Kentucky counties, Grayson and Logan, have recently summoned men into court for driving unmarked buggies. A court date on Thursday could land more in jail.

A group of Swartzentruber Amish who recently met with an Associated Press reporter at Gingerich’s farm fear they would be treated as outcasts by other Swartzentruber communities around the country if they use the safety triangles.

Many Amish use the triangles with little objection, but Swartzentruber is a breakaway order that follows even stricter rules on modesty, humility and behavior than other Amish.

“If we go ahead and put it on, the other groups of the Amish in other states, they would shun us,” said Joe Stutzman, another man who has been jailed.

The issue over triangles has come up before in other states with Amish populations. Ohio, New York and Pennsylvania have allowed exemptions from the orange triangles, and courts in Wisconsin, Minnesota and Michigan have sided with the religious freedom argument.

But Kentucky authorities say using the orange triangle is still the law.

“We feel that the reflective triangle is the best way, at least right now, to be able to see those slow-moving objects on the road,” said Dean Patterson, a spokesman for the Kentucky State Police.

Patterson said authorities sympathize with the Amish’s religious argument, but “we still incorporate them into the traveling public, so we can’t pick and choose who we want to protect. We also have to protect them.”

Collisions of motor vehicles with Amish buggies are often fatal. In November, a teenager using a harness-type horse carriage was killed in central Kentucky when he was struck from behind by an SUV. The buggy did not have a reflective triangle, though the family was not a part of the Swartzentruber order. Several other fatal collisions with Amish buggies happened in the U.S. last year, though it’s not clear in each case whether reflective triangles were used.

The Kentucky Court of Appeals ruled in June that the Amish would not be excused because the law “serves as a condition to utilizing a certain privilege: the use of state roads.” The Kentucky Supreme Court plans to hear the case.

Gingerich said Swartzentrubers, just as they have for decades, will continue to refuse to hang the triangles or pay fines.

Graves District Judge Deborah Crooks has set a Thursday deadline for outstanding fines against the nine men, which means Gingerich and others could be sent back to jail. Gingerich owes more than $600 in fines and court costs.

Gingerich keeps a file cabinet drawer full of court papers on his farm. One is a 2004 letter from Cunningham, the Graves County Attorney, who said the Amish buggies could use gray reflective tape and hanging lanterns.

That’s just what Gingerich and his friends did, but he said they began receiving tickets a few years ago.

Cunningham “says he sent letters out to let us know that law is not validated anymore,” Gingerich said. He said he never received the letter.

The judge and county attorney did not return calls seeking comment.

The jailings in September outraged some Kentuckians, even outside of Graves County.

“When I first heard about this, a little voice in the back of my head said you should really help them out down there,” said Michael Meeks, a Louisville business owner who spent time on a Quaker farm as a youth. Meeks paid Gingerich’s outstanding fines in September, freeing him from jail a couple of days early.

“They’re not breaking the law in my mind,” said John Via, a Mayfield resident and a former state transportation worker who also paid an Amish man’s court fine in September. “But they got a jail record that will travel with them the rest of our days.”

Kentucky lawmakers could solve the impasse. Some legislators have proposed changing the law to allow buggies to use gray reflective tape instead of the orange signs.

“I think the Amish are in the right, it’s that simple,” said Rep. Johnny Bell, a Democrat from south-central Kentucky who plans to file legislation next month. “I think they should be allowed the lifestyle that they choose, as well as the rest of us.”

Aside from religious objections, the Amish men say the reflective triangle offers no more protection from a car than the gray reflective tape. To support that, Gingerich cites a 2001 Penn State University study concluding that reflective tape instead of the triangle would “not result in a safety reduction for the Swartzentruber Amish.”

Levi Hostetler was struck by a car coming around a bend in Graves County a couple of years ago, destroying his buggy and sending him to the hospital with a concussion. He wonders what difference an orange triangle would have made.

The car’s driver “said he couldn’t see nothing,” Hostetler said. “Didn’t matter if I had Christmas lights or whatever on, he couldn’t have seen it.”