Insurance Journal wishes to thank the many customer service representatives, account executives, producers, managers and other agency staff who took the time to nominate their independent insurance agency in this year’s survey.

Many independent agencies give back to their community, but Herbie Wiles Insurance (HWI) in St. Augustine, Fla., has taken that to a new level by donating its whole building to the community.

In 1966, agency founder and CEO Herbie Wiles bought a vacant, old house and renovated it for an office, turning an eyesore into a landmark. In 1980, the agency expanded by buying the house next door and joining it with the original office. By 2007, even that doubled space proved inadequate for the growing business, so Wiles built a new home for its business on its location. But it did not destroy the old place; it donated the historic structure to the city and paid to move it to another site, where it now is a museum.

The agency with its 28 employees serves St. Augustine and neighboring northern Florida communities including Jacksonville and Orlando. The agency writes about $28 million in premium per year — everything from the “little old lady with one automobile” to larger accounts around $200,000, says President Doug Wiles, who joined his father in the agency in 1979. The firm also has a few niche markets including condominiums, religious institutions and bed and breakfast establishments.

The spirit of giving behind the agency’s museum donation, and its support for various community causes, helped make Herbie Wiles Insurance Insurance Journal‘s Best Agency to Work For in the Southeast for 2012.

When Doug Wiles talks about running his business, he talks about doing something because it is the “right” thing to do — from matching 401(k) contributions to tailoring work hours to the individual, when possible. 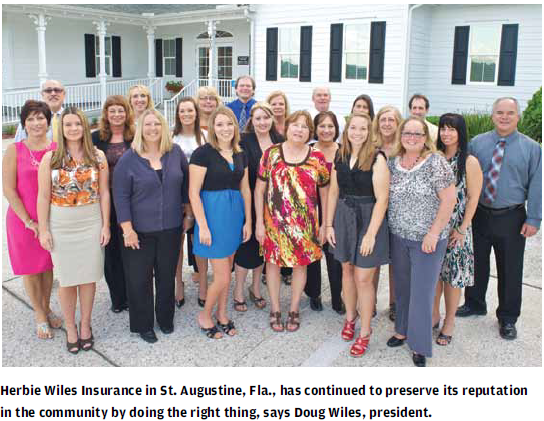 “It’s all a part of being fair and treating people with respect, treating them as professionals, and recognizing that every job in the agency is important, regardless as to what it is. Certainly, there are differences in jobs, but certainly all are important,” Wiles says.

Of the benefits of working at the agency, employees gave high marks to the group plan, office hours, working conditions, performance reviews and all of the other tangible perks. The most popular tangible benefit, however, is actually another form of giving: profit sharing. Every non-producer in the agency gets an equal share of 10 percent of the profits. Producers have their own incentive plan to reward new business.

The profit sharing plan has helped business, according to employees. “This generates excitement within our team, and the number of referrals we receive increased exponentially once it was implemented,” one said.

“Sharing the agency profits with our staff is an appropriate thing to do to reward a good staff,” Wiles says. “It also has helped them buy into what we’re trying to do. If they can see some financial results for the hard work that they put in for those occasional extra hours and for the extra care they take with our clients … we all win.”

As appreciative as they are of the profit-sharing checks, employees also rate the intangible benefits of working at Herbie Wiles very high.

“This is a family run agency that has been in the community for 50 years, that has achieved a reputation of honesty, compassion and integrity that makes everyone proud to be associated with it,” said an employee.

A few years ago the agency’s priorities were tested during the economic slowdown, which hit Florida especially hard. Management decided to freeze salaries.

Employees think they did the right thing. As one employee said, “When the economy started to take a downturn, well before it affected HWI, Doug Wiles, started making small expense cuts, and we took a salary freeze for one year. This enabled us not to have to lay any staff off during a recession. He had the vision to see the agency through the difficult times, and we all pulled together and made it work. True leadership!”

Wiles, an Army and National Guard veteran and former elected state representative, says he inherited the agency’s good reputation in the community from his grandfather, father and those who came before him.

“My family did a pretty good job in the business. My challenge was not to screw it up,” he says.

Like the office that is now a museum, it appears the agency’s good reputation has also been well preserved.

Other Best Agencies to Work For in 2012 include: