Abuse of assignment of benefits (AOB) from water loss claims has become a full-blown Florida insurance crisis that will mean higher insurance rates next year and for the foreseeable future for every Florida policyholder, according to Citizens Property Insurance Corp. CEO Barry Gilway and Chief Risk Officer John Rollins.

“We are going to have a round of rate increases from private carriers,” said Rollins. “South Florida will definitely have a rate increase. The question is more open in the rest of the state, but the trends are very disturbing.”

Private insurer executives have echoed the warning and say hikes of as much as $1 billion will be needed.

The issue now most commonly referred to as just “AOB” took center stage at the Florida Association for Insurance Reform’s conference on April 28. Several industry experts said AOB is no longer just a problem for Citizens, the state-backed property insurer, and maintained the impact will go far beyond rates if the “crisis” isn’t addressed. The overall Florida market will also suffer, especially if the state is hit by a serious catastrophe.

What you've seen is a situation where a flu in South Florida is turning into a pandemic for the rest of the state.

“[AOB] is also trickling into the reinsurance pricing,” Bruce Lucas, chairman & CEO of Heritage Insurance said at the FAIR event. “The number one question asked of us by reinsurers is, ‘What are you doing about AOB?’ because after a storm, it could be a big issue.”

Citizens, which has seen AOB claims skyrocket, was the first to highlight the issue in its rate filing last summer. Now the insurer is re-tooling its efforts to combat the AOB abuse in light of Florida lawmakers’ failure to enact a legislative solution.

By law, Citizens can only raise rates by up to 10 percent per year. But in parts of the state where AOB abuse has been rampant — namely the tri-county area of Miami-Dade, Broward and Palm Beach counties — Citizens said “actuarially sound” rate increases should be as high as 189 percent. In other parts of the state Citizens had expected to decrease rates by about 10 percent, but that is no longer the case.

Gilway said private carriers that are also experiencing a significant rise in AOB claims have more options than Citizens has. Private insurers’ options include raising rates by as much as 15 percent without Office of Insurance Regulation (OIR) approval, or withdrawing from or eliminating zip codes where the abuse is rampant – such as in the tri-county region.

If that happens, Gilway and Rollins said the result would be a market availability crisis, and the depopulation efforts that have brought down Citizens’ policy count in the last several years will be completely reversed.

“The implications of that for us are huge. We are statutorily required to write business in tri-county, so if no one else is writing it, those policies come to us,” Gilway said.

Carrier executives on a panel at FAIR’s recent conference echoed the sentiments that this is no longer just a Citizens’ problem.

“We will be raising rates by about 5 percent this year because of AOB,” said Locke Burt, chairman and president of Security First Insurance.

“This is a $1 billion issue – a billion dollars in rate increases this year to the consumer. We can write against it, we can shut down zip codes, we can take action. Citizens can’t do that,” said Lucas of Heritage Insurance. 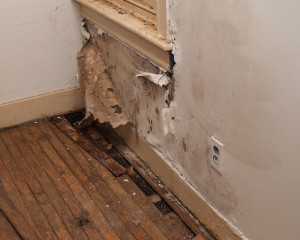 Education efforts by Citizens, as well as industry and consumer groups, are helping to raise awareness of the issue but may be having a negative impact in the short term. Severity of claims and AOB lawsuits are still increasing, Gilway said. In fact, Citizens had 1,000 suits in March alone – the highest monthly number over the last two years.

“It appears to be a ‘run on the bank’ scenario with the attorneys saying, ‘I need to get my suit in now’,” Gilway said. “We were seeing about 620 suits a month in the last two years. During that same period our policy count dropped by two-thirds, so you would expect to see a decrease in the number of suits.”

Gilway said private insurers are having similar results – with some reporting 12 to 14 new suits a day. “As of right now the problem is getting worse and not better,” he said.

Outgoing Florida Insurance Commissioner Kevin McCarty emphasized the effects the AOB issue is having on the Florida insurance market, and ultimately on consumers.

“This is a true victimization of homeowners – now everyone else is going to have increased costs. That’s exactly where we don’t want to be,” McCarty said. “We have to have a broad public policy conversation on what can be done.”

Rollins and Gilway agree a legislative solution is the only way to really stop the abuse. However, the effort put forth in the just-ended Florida session fell apart for the fourth year in a row.

Gilway said the reason for that was twofold: lobbying efforts by water remediation companies and contractors, as well as law firms currently benefitting from the AOB provision; and the insurance industry’s inability to reach a consensus on what needs to be done to combat the problem.

“We got out-lobbied, there is no question. But the other issue is the industry itself – we are not on the same page,” Gilway said. “There is a lot of work to be done to pull the industry together.”

Specifically, Gilway said, State Farm walked away because the insurer said Florida’s one-way attorney fee shifting statute blamed for the AOB abuse was not being corrected. Florida’s statute allows policyholders, or in the case of an AOB by a policyholder, to recover their attorney fees upon the successful completion of coverage litigation.

Because it’s a one-way fee shift, if an insurer wins a claim suit it cannot collect its legal fees from policyholders. In other words, claimants have nothing to lose by filing suit. Gilway says State Farm didn’t want the Legislature to pass a bill unless it was a comprehensive reform measure that addressed the statute.

“As long as you have a statute in place that basically says any contractor on behalf of the insured can sue the insurance company, and when that happens if we pay $1 dollar more than the original estimate the insurance company is responsible for all of the attorney fees, it’s a no-lose proposition for the trial bar,” Gilway said.

There may be hope for next year. State Senator Jeff Brandes said his colleagues are finally recognizing AOB abuse as a crisis. What started as water claims in one part of the state is now spreading to roofing claims in other areas, and what is meant to be a consumer protection is now having the opposite effect.

“What you’ve seen is a situation where a flu in South Florida is turning into a pandemic for the rest of the state,” Brandes said. “It’s risen to the level now where lawmakers are starting to hear that policies are going back into Citizens and that companies are simply not writing in the tri-county area. You are going to see a substantial shift now in policymakers thinking.”

Brandes said ideas that have generated some support involve “moving towards a managed repair model,” that would be similar to the health insurance market where consumers can choose between an HMO or PPO. In this case, policyholders would have a contractor list to choose from for a water loss claim to get a lower rate on their policy.

“It might be a solution that drives down costs and allows consumers to have a choice,” Brandes said. “At the end of the day, this is really a contract between insurance companies and the consumer, so to have a lower rate you would have a defined list of contractors to choose from, and that’s a choice the consumer is making. As long as it is well-disclosed and people are upfront about it, it’s a fair way to do it.”

“The AOB issue really highlights the need for a discussion of what the future of Florida insurance looks like and I think the HMO/PPO model really creates an interesting discussion,” he added.

Brandes said he doesn’t know yet if he will sponsor legislation around the issue in the next session, but before anything can happen the industry needs to come together on a solution.

“They need to sing it as a chorus, but [so far] there’s been a lot of solo acts,” Brandes said. “At the end of the day, we are hearing the coalescing around a number of ideas that we can begin to support.”

Whether that will translate into action next session, however, remains to be seen.

Citizens launched a policyholder education campaign earlier this year called “Call Citizens First” to encourage policyholders to reach out to the insurer or their agent when water loss first occurs. Gilway said that today, the average claim comes in 33 days after the event, making it very difficult for the insurer to adequately assess the claim and leading to increased costs. He said by the time Citizens is made aware of a water loss claim in those cases, 90 percent of them already have representation.

Rollins said the severity of the cost of the claim at least doubles when it is litigated.

“If you are on the other side of this process as a plumber, water remediator or attorney, you are potentially generating four times the marketplace for yourself by taking a natural claim that is maybe $8,000 and making it a $35,000 claim,” Rollins said.

*The form changes have been updated from an earlier version of this story.

The insurer recently implemented other changes in an attempt to curb the problem. OIR has approved form filings by Citizens that includes new policy language as related to water loss reporting (see box).

In his last interview with Insurance Journal as the Florida Insurance Commissioner, McCarty said OIR worked with Citizens to refine the language in its policies so what has always been intended is spelled out in the contract. “It is important to note that this is not a cutting of benefits,” he said.

McCarty said OIR has been encouraging other insurers in the state to look at the Citizens filings and submit their own changes. As of the end of April, 13 other companies had done “me too” filings.

McCarty said OIR is not requiring insurers to make a rate filing to accomplish this form change. “We don’t see this as a rate change,” he said at the recent FAIR conference. “We are making sure the insurance company has the ability to do what its responsibility is to do under the contract, which is to inspect the claim.”

Communication between the policyholder, insurer and agent is key, Gilway and Rollins said, and they say Citizens has to do a better job ensuring that happens.

Its focus now is making policyholders aware of the form changes and the importance of contacting the insurer when a claim occurs, but Gilway said the company needs help from the more than 8,000 agents it has in the state. He said right now most agents are not involved when a policyholder has a water loss and AOB, and are as surprised as Citizens when a suit is filed.

Agents, he said, have to “play a much more significant role in getting the word out.”

Rollins said the involvement of the agent community will be the difference between success and failure with Citizens current efforts.

“They are the ones policyholders turn to,” he said. “We need a ground game to succeed and that’s where the agents come in. We all have to get on the same page.”