The Colorado Legislature has once again delayed a vote on a bill aimed at preventing agricultural fires from starting wildfires.

The move on Friday came after its sponsor said he wanted to kill the proposal because farmers oppose it.

The measure would clarify that county commissioners can ban agricultural burning and campfires when fire risk is high. It was initially recommended by a legislative panel. 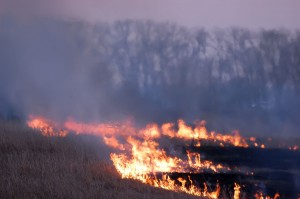 “It sounded like a pretty decent bill. But after looking at it and getting into it, I realized there could be a possibility” of county officials overusing the power, explained Sen. Larry Crowder, R-Alamosa, its sponsor.

Crowder previously led a charge to delete a provision giving the county commissioners the power to ban fireworks after it appeared that counties already have that power.

Some of Crowder’s fellow Republicans blasted the limits on agricultural fires.

“It’s not like we’re reckless. We have too much to lose,” said one of the few farmers in the Legislature, Sen. Greg Brophy, R-Wray.

Rep. Millie Hamner, D-Dillon, another sponsor of the agriculture burning measure, says she wants to find a new sponsor to save the bill.

“I live in a county where there are acres of agriculture, there are beautiful homes and there are miles and miles of wooded forests,” Hamner said. “It’s just a disaster waiting to happen, especially if our county officials that we elect into these positions feel that it’s unclear about whether or not they can step in and say to ag burning, ‘This isn’t a good day for it.”‘

The agriculture bill isn’t the first wildfire-related measure to stall in the Legislature. Lawmakers have worked on modest proposals this year to address wildfires but have stayed away from more ambitious measures.

A statewide building code recommended by a governor’s panel was never taken up. A Republican proposal to buy a state-owned air fleet to fight fires was introduced Friday but faces an uncertain future amid concerns the planes would cost too much to maintain and may not make a big difference when a fire breaks out.

“They would be so expensive for us to maintain that we wouldn’t have sufficient funds remaining for all the other ways that we need to fight wildfires,” said the head of wildfire review panel, Democratic Sen. Jeanne Nicholson of Black Hawk.

Nicholson said another bill is in danger in the Legislature that gives mountain homeowners tax credits for undertaking wildfire-prevention measures such as trimming trees.