The Oregon Supreme Court has been asked to invalidate a ski resort’s liability waiver by a snowboarder paralyzed from the waist down on one of the resort’s expert jumps.

The snowboarder’s attorneys argue that the resort bears a responsibility for the jump’s design, which they argue was flawed, and say the resort’s waiver is “unconscionable.” Attorneys for the resort, Mt. Bachelor in Bend, replied that the snowboarder must take into account the inherently risky behavior of expert jumps.

The arguments Wednesday at Astoria High School’s auditorium centered on the difference between the assumed risk that skiers and snowboarders take on dangerous jumps and the responsibility of a snow park operator to make sure its jumps and moguls are safe.

Myles Bagley was 18 when he was injured at the Mt. Bachelor ski resort in 2006 on a jump. Bagley sought $21.5 million in Deschutes County Circuit Court in 2008. A judge threw out the lawsuit, and the court of appeals affirmed. 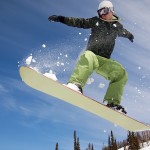 Bagley’s case could have broad ramifications for release agreements that must be signed in order to take part in an activity. The Legislature has made specific rules for amusement parks, which include ski lifts, but the issue of broader recreational activity has not yet been defined.

One of Bagley’s attorneys, Kathryn Clarke, argued that the waiver is contrary to public policy, saying that it protects Mt. Bachelor from activities that people have a right to engage in.

“It’s a risky sport, and Myles Bagley knew that,” Clarke said. “That’s what he thought he was agreeing to, assuming the risks of the sport. But that’s not what happened.

Andrew C. Balyeat, an attorney for Mount Bachelor, argued that skiing and snowboarding are activities in which the participants assume risk. To propose waivers for any activity would be excessive, he said, but in some cases, risk is assumed.

“If you buy a ticket to a movie theater, do you have an expectation that a projector is going to fall on your head? No,” Balyeat said. “Like it or not, for those of us who love to ski and love to snowboard, it’s risky, it’s dangerous, it’s icy.”

The justices’ questions focused on finding precedent in Oregon law for Bagley’s claims. Clarke argued that consumer law is the main factor in the case – Bagley was sold a good, she argued, that injured him.

“He chose not to participate because the course was unsafe,” Balmer said. “Why should the owner of a course not be liable for an unsafely designed course?”

Balyeat replied that the jump is similarly, inherently risky.

“Nowhere does it say,” Balyeat said, “that a mogul or a tabletop jump isn’t part of the risk.”