The Montana Farmers Union launched an initiative this month to educate its 11,000 members about the effects of global warming in Montana, where early signs may be decreasing snowpack and resilient weeds and pests.

The union’s move is the first in the state’s agriculture community to link recent farming difficulties to climate change.

“It’s great that we’re finally starting to talk about it,” said Anna Jones-Crabtree, who farms a variety of organic crops with her husband, Doug Crabtree, north of Havre.

Farmers Union President Alan Merrill said he’ll try to steer discussions away from the possible origins of climate change when the organization visits with small groups of farmers throughout the summer. The only goal of the meetings and accompanying online portal is to provide farmers with facts, starting with the 2.4-degree increase in Montana’s average temperature since 1900, Merrill said. 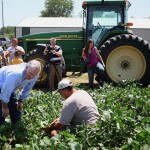 Like others who push back against the contentious topic, pea and wheat farmers Cory Davis of Canyon Ferry and Kim Murray of Froid rebut human involvement in global warming. Murray, who is chair of the Montana Pulse Advisory Committee, said long-term effects of global warming dull in comparison to individual dry spells, and he’s not convinced the climate is changing.

But politics aside, farmers said they’re interested in hearing about climate and weather patterns.

The union is gathering and sharing information on the reality of a warming climate, increased occurrences of violent storms and reduced crop yields that some farmers have been adapting to for years.

Davis, Murray and the Crabtrees raise a small portion of the state’s roughly 800,000 acres of pulse crops, or legumes like peas and lentils, which need little water and are in high demand. For two decades, pulses have been growing in popularity among farmers contributing to Montana’s $4.2-billion agriculture industry, and in 2013 the state became the nation’s top producer of lentils and peas.

For most growers, the dryland crops present a profitable alternative to their fields’ fallow, or off-years. But others, including researchers at Montana State University in Bozeman, put value on the soil-enriching and pest-reducing qualities of pulse crops and use them, knowingly or not, to reduce the effects of what the union is recognizing as climate change.

Davis sowed lentils this year after a widespread infestation of wheat crops by pests in 2014 that Montana State researcher Fabian Menalled said could be linked to a warming climate.

“What we are seeing in Montana is a reflection of what is happening around the world,” Menalled said. “Temperatures are increasing.”

Some farmers have turned to no-till machinery, replaced flood irrigation with sprinklers and drip systems, or invested in better insurance to adjust. But those options are expensive.

Murray has been successful on his 6,000 acres by churning the soil as little as possible and alternating his wheat and barley with legumes.

“We don’t want to lose our moisture. We get so little,” Murray said. “We want to make the most out of every drop that we get, and this is the best way to do that so far.”