Police say a mid-level manager for Taco Bell Corp. repeatedly slapped an Uber driver in the face after being told to get out of the car because he was too drunk to give directions.

The incident Friday was captured on dash camera video that was posted online. Police say it shows Benjamin Golden, of Newport Beach, Calif., repeatedly hitting 23-year-old Edward Caban, grabbing his hair and slamming his head against a window.

Police say Caban defended himself by pepper-spraying Golden. The 32-year-old Golden was arrested on charges of public intoxication and assault. 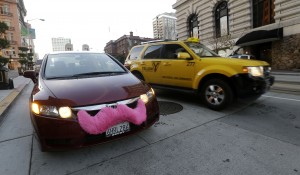 A Taco Bell Corp. spokeswoman said in a statement Monday that Golden has been fired from his position as a brand manager for the company.