The University of California has acknowledged its negligence was a substantial factor in the death of former California football player Ted Agu.

The 21-year-old defensive lineman from Bakersfield died nearly two years ago after a strenuous team workout. His family filed a wrongful death lawsuit, arguing that Agu had sickle cell trait and should not have been put through an exercise where players sprinted up and down a hill while holding a rope together.

Experts believe sickle cell can affect some athletes during periods of intense exercise, when the inherited condition causes red blood cells to warp into stiff and sticky sickle shapes that block blood vessels and deprive vital organs and muscles of oxygen.

The lawsuit alleged that coaches and trainers did not come to Agu’s assistance when he was clearly struggling and that the university was negligent for hiring and retaining head football trainer Robert Jackson, who previously worked at Central Florida, where he oversaw a 2008 workout in which another athlete with sickle cell trait collapsed and later died. 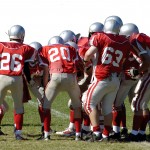 UC Berkeley officials said in a statement that by declining to contest liability, they could focus the legal proceedings on appropriate compensation for Agu’s family.

“Saying that their wrongdoing solely caused this young man’s death is certainly not enough,” said Steve Yerrid, one of the attorneys representing the Agus. “There needs to be reform and meaningful change.”

The admission came after testimony, given in confidential depositions, detailed allegations that campus officials did not provide the Alameda County coroner’s office with all police and medical records after Agu died.

The office initially determined that Agu died of hypertrophic cardiomyopathy, which is an excessive thickening of the heart muscle. But after the Agu family’s attorneys asked coroner’s officials to re-examine the evidence and read teammates’ account of the incident, they amended the cause of death in October, certifying that the primary cause was exercise collapse associated with sickle cell trait.

The depositions were obtained by UC Berkeley’s Investigative Reporting Program and shared with The Chronicle.