Utah’s governor has signed into law a measure that makes the state the first to let authorities jam drone signals and crash the devices specifically for flying too close to wildfires.

Republican Gov. Gary Herbert’s office announced this week that he signed the law over the weekend, just days after lawmakers met in a special session to pass it and a handful of other bills.

State Sen. Evan Vickers, who co-sponsored the law, says it technically allows firefighters and law enforcement to shoot down drones, but they probably won’t do that because it’s too difficult.

Instead, authorities are expected to use technology that jams signals and crashes drones. 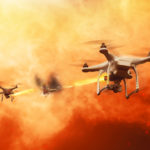 Utah passed the law after a drone recently was sighted five times over one wildfire, causing firefighters to ground their aircraft and slow their work.