A large earthquake along the San Andreas fault impacting both Northern and Southern California at the same time could wreak much more havoc than most may believe.

Such an event, once considered impossible up until demonstrated otherwise by the U.S. Geological Survey a few years ago, could cause up to 126 percent more residential property damage than previously thought, according to a report out today from data provider CoreLogic.

The analysis is based on the USGS’s most recent version of the Uniform California Earthquake Rupture Forecast, which concluded in 2013 that a single large earthquake could rupture simultaneously in both in the northern and southern parts of the state, and that quakes of magnitude 8.0 and higher will affect a larger land area and greater number of people.

Until recently it was believed the northern and southern portions of the San Andreas couldn’t affect each other during a quake as they were buffered by a “quiet zone,” but now scientists believe temblors in proximity to other faults have the potential to trigger them, said Maiclaire Bolton, a senior product manager at CoreLogic and one of the authors of the report. 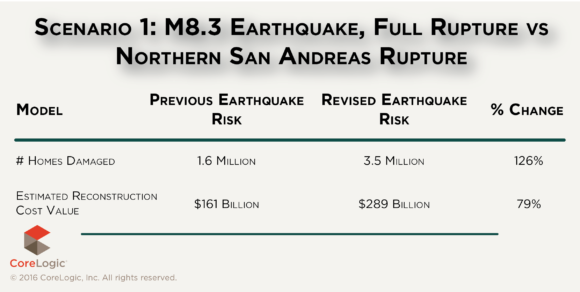 CoreLogic used the USGS data to produce a new earthquake risk analysis that illustrates the higher conditional probability of losses for an earthquake impacting both regions simultaneously.

The CoreLogic analysis shows that an M8.3 along the San Andreas fault could result in a full rupture and increase the number of homes damaged from 1.6 to 3.5 million homes, and push up the reconstruction value from $161 billion to $289 billion.

“A full rupture now has the probability of impacting in essence almost the entire state,” Bolton said, adding those areas include the densely packed San Francisco and Los Angeles regions. “That was always thought to not be possible.” 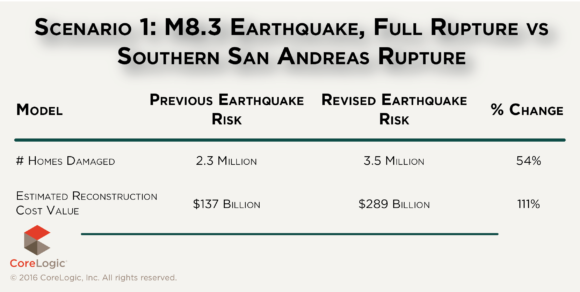 If there’s any good news in the report it’s that for both portions of the fault to be triggered it requires a huge quake, likely 8.0 or larger, she said.

“It really is these major, large events that do have the potential to impact Northern and Southern California,” Bolton said.

The report also looks at a smaller M8.0 earthquake, thought to be just big enough to have the potential to impact both regions of the fault, and shows it would impact more than 2 million homes across the state with a total reconstruction value of $145 billion.

“I think the big thing is we know we have an earthquake risk in California, that’s not new, that shouldn’t surprise anyone, but I think that what is new that (the report is) showing the potential that an earthquake could be a lot larger in terms of area than previously believed could be impacted,” Bolton said.