The record head that baked Northern California over the Labor Day weekend left wine grapes shriveling on the vines, reducing many of them to raisins before the normal harvest and turning what was looking to be a promising vintage into a year that looks more uncertain.

The San Francisco Chronicle reported that three straight days of triple-digit temperatures in the winemaking regions around San Francisco dehydrated the wine grapes, sometimes causing some vines’ entire metabolic process to shut down. Watering the vines can help counteract the dehydration, but many winemakers try to avoid irrigation too close to harvesting for fear of diluting the berries’ flavors.

“I’ve been making wine for 34 years, and I don’t think Napa’s ever seen this excessive heat at this stage of ripeness,” said Pam Starr, co-owner of Crocker & Starr Wines in St. Helena, where temperatures exceeded 110 degrees three days in a row. “I thought we were going to make it through without a lot of repercussions, but that’s not the case.”

She said she was able to save some of her parched grapes with watering, but she estimates that some blocks on her vineyard lost as much as 50 percent of their crop due to raisining. 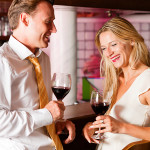 Although September heat waves are not uncommon for California wine regions, it was nearly unprecedented to have one this early and close to the point of ripeness for wine grape varieties like Cabernet Sauvignon.

Winemakers said they’ll have to put grapes that taste overripe into a lower quality, less expensive wine blend or sort out the raisins before the berries get to the fermenter.