Numbers from June are still outstanding but are expected to push taxable sales past $500 million, netting total tax revenue in the neighborhood of $70 million, with about $25 million devoted to schools.

“I think it has been a huge success, and I don’t see how anyone could argue with that,” said Andrew Jolley, president of the Nevada Dispensary Association.

A legal battle over distribution licenses made for a rocky start last July, but Nevada’s $195 million in sales for the first six months dwarfed the totals in Washington state ($67 million) and Colorado ($114 million) for the first half-year of legal sales in those states in 2014. And so far, there’s no sign legal sales that began in California on Jan. 1 have cut into business in neighboring Nevada, regulators say.

“We are viewed by many others outside Nevada as essentially being the gold standard,” Nevada Taxation Department Director William Anderson told The Associated Press. “It’s an often-used term, but it’s appropriate here.”

State Sen. Tick Segerblom, a Las Vegas Democrat who helped lead the legalization effort, added the “biggest surprise has been that there’ve been no surprises.”

But not all the reviews are glowing.

Some medical marijuana patients insist they were better off before Nevada legalized recreational pot. Tourists still have nowhere to legally smoke the drug, at least for now, and opponents remain skeptical of the impact on children.

Nevada’s Public Safety Department plans to release early data on the trends in the next few weeks.

Anecdotally, Douglas County School Superintendent Teri White said her district near Carson City had more problems with marijuana the first three months of the school year than she’d experienced her entire career. Churchill County High School Principal Kevin Lords in rural Fallon estimated student marijuana use has tripled in his district, including cases of edibles being distributed by adults.

Jim Hartman, a leader of the effort to defeat the 2016 ballot measure legalizing recreational sales, said it’s too early to draw conclusions. “But it only makes sense to me if you legitimize it and make it more accessible, you are going to get more youth use.”

What irks him most are those giddy about the revenue numbers he says are being blown out of proportion in terms of benefiting schools.

“They are celebrating the sale of marijuana products. It isn’t as though SAT scores are increasing,” said Hartman, chairman of Nevadans for Responsible Drug Policy.

The 10 percent retail tax levied only on recreational sales goes to the state’s rainy day fund, a total of $26.5 million through May. Money raised from the 15 percent wholesale tax applicable to medical use as well, about $24 million through May, goes to schools, but not until about one-third is used to cover local and state administrative costs. 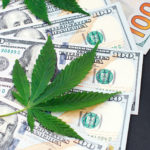 That means about $25 million in wholesale revenue anticipated for the first full year of sales will be shared by schools in Nevada’s 17 counties based on enrollment, with $17 million likely headed to Las Vegas and surrounding Clark County and $8 million divided among the rest, perhaps $5 million for Washoe County, including Reno and Sparks.

“People have a huge misconception that we are going to build libraries and roads and all kinds of things with this marijuana money,” Hartman said. “But in reality, these are tiny, tiny numbers.”

Segerblom and others think the figures will grow, especially when local governments start using their authority to license smoking lounges or other public places for marijuana consumption. Currently, the only legal places are private residences in the state that attracts nearly 50 million tourists annually.

The Las Vegas City Council initially backed off such a move, waiting for places like Colorado to test the waters. But it recently resumed accepting public comment on the matter, and Segerblom thinks the city will move that direction following November’s elections.

The biggest criticism has come from the medical marijuana community. Broad legalization has resulted in dispensaries stocking fewer higher-potency products that cannot be sold for recreational use, critics say.

“I know people complain about the medical, that there has been less availability,” Segerblom said. “That is one of those things that is going to have to work its way through the system. With the recreational sales, there should be more money available for all kinds of products.”

Mona Lisa Samuelson, a leading advocate of medicinal marijuana, said legalization of recreational use “may be the very worst thing to happen to our medical marijuana patients.”

Anderson said Nevada has seen the same trend as other states with dual programs of medical and adult use. He expects to propose some potential remedies before the next legislative session.

Jolley, of the dispensary group, advocates making medical marijuana more accessible to patients by eliminating the state sales tax on it in the same way pharmaceutical prescriptions are exempt, and possibly lowering wholesale taxes on medical sales.

Segerblom is reluctant to mess with the tax structure but says one approach might be to provide tax credits for medical pot purchases to offset insurance deductibles.

Jim Lamb, vice president of the Las Vegas Medical Marijuana Association, thinks the state should provide free medical marijuana cards to anyone age 55 or older. The cards normally cost about $115 and require a signed physician’s form.

Anderson insists it’s important to continue to serve the medical community one way or another.

“We don’t want that access to go away,” he said.