An analysis by catastrophe modeler RMS shows 15 wildfires are burning more than 280,000 acres in California have collectively destroyed nearly 7,000 homes and businesses and killed 31 people.

The biggest of these is the Camp Fire, the most destructive wildfire in history,with 6,700 structures burned. During a period of particularly intense wind, it spread at a rate of more than one football field per second with entire towns in its path destroyed. 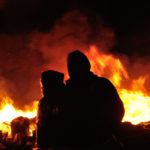 Two large Southern California wildfires are in close proximity: the Woolsey and Hill Fires, which have triggered 250,000 evacuations. The Woolsey Fire has burned many well-publicized landmarks and neighborhoods, and 177 structures have been destroyed and two fatalities recorded, according to RMS.

“From a scientific perspective, these fires did not behave in unexpected ways given the conditions at the time of ignition: dry climate, low vegetation moisture, and prolonged intense seasonal winds,” the RMS analysis states. “The fires spread quickly after their ignitions and accumulated burning embers. These embers were lofted into the air, causing long-range spotting that enabled the fires to jump wide highways and cause damage far beyond the flaming fronts.”

A Moody’s report out on Monday shows that based on past fires and the number of structures damaged, “insured losses will run in billions of dollars.”

According to Moody’s losses could be around $6.8 billion so far.

“Given already high construction demand from the 2017 and 2018 wildfires and a strong housing construction market, the spike in demand for construction labor and materials following the three wildfires will lead to higher insured losses,” the report states.

The 2017 October and December wildfires had an estimated $12.5 billion in insured losses.

“California homeowners insurers are also likely to be adversely affected by additional living-expense claims given that around 300,000 residents have been forced from their homes because of the three fires,” the Moody’s report states. “Additional living expenses are typically capped at 30 percent of a dwelling’s value and are paid only if the property is damaged or if the property has been subject to mandatory evacuation. Some commercial property insurers are also likely to pay business-interruption claims.”