Three areas in Alaska topped the list of most reports of snowmobile thefts in the U.S., according to an analysis of national crime figures.

Anchorage recorded the most thefts in the U.S. with 46, followed by the Fairbanks North Star Borough with 44. The Matanuska-Susitna Borough recorded 23, tying for third with Anoka County outside Minneapolis, Minnesota. 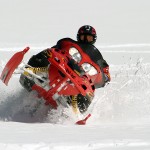 The Illinois-based bureau has tracked thefts of other vehicles, but this is the first report on snowmobiles, said Frank Scafidi, the nonprofit’s director of public affairs.

“We wanted to see what would happen if we looked at snowmobiles,” Scafidi said. “Would we find anything weird, like a bunch of thefts reported in Florida?”

The results were as expected: Snowmobiles were mostly reported stolen in places where they are typically used.

Following Alaska, Minnesota, Michigan, Wisconsin and Washington had the highest numbers of snowmobiles reported stolen, according to the report. Law enforcement agencies took at least one snowmobile report in 32 states, including Texas.

The report did not have 2018 numbers, but Anchorage police said Alaska’s biggest city had five reports of stolen snowmobiles last year.

“I think we have a huge percentage of people that own snowmobiles, and as a consequence, there’s a demand for not just used sleds but for parts,” said Tim Cook, president of the Anchorage Snowmobile Club.

Snowmobiles are not required to have titles in Alaska. They are required to be registered with the state, but “unfortunately we don’t register as many sleds as we should,” Cook said.