Poor communication, short staffing and infighting among agencies may have endangered firefighters who nearly died during the massive Mendocino Complex of wildfires in Northern California, according to a new report released.

The Los Angeles Times reported that staff from three fire agencies examined an Aug. 19 incident where Los Angeles and state firefighters were trying to keep the three-week-old blaze from charging through wilderness and reaching homes.

Some were concerned that there was no clear plan for building the line and the majority didn’t believe they knew what they were supposed to do, the report said. 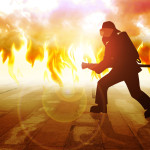 A wind shift caused flames to surround the firefighters, who had to scramble through the forest to safety through embers and ash as terrified deer darted past them.

The strike team leader thought: “This is how it ends. We are going to be vaporized,” the Times reported.

They finally reached a road and were rescued by other firefighters. Five firefighters were treated for burns and one had a dislocated shoulder.

Interviewing firefighters, staff from the U.S. Forest Service, California Department of Forestry and Fire Protection and the L.A. Fire Department came up with a portrait of problems that may have contributed to the near-tragedy.

One firefighter said there was “rivalry” between the federal and state agencies that slowed down operations.

Because of the enormity and complexity of the fire, two incident management teams were used instead of the usual single team, which duplicated jobs, sowed confusion about who was in charge and created unnecessary bureaucracy, the report said.

That sparked tension and made firefighters more hesitant to speak out about plans they believed were dangerous, the report said.

In addition, more firefighters were needed to tackle the wildfire but they already were tied up fighting other large wildfires around the state and communication may have been hampered by radio “dead spots,” the report said.