You can download the PDF of the Young Agents Survey Results for free, compliments of Foremost Insurance Group.

The independent insurance agency system is getting older. So much so that the average age of a U.S. insurance agent today is 59 years old, according to some estimates. And as more than a quarter of the entire insurance industry gets ready to sail into retirement in the next three years, the next generation of agency talent – young agents and agency owners in particular – better get ready to step up.

This is good news for young professionals working in independent agencies today – those 40 years old and younger.

According to Insurance Journal‘s Young Agents Survey 2015, 82.7 percent of young agents feel very optimistic or optimistic about their career as independent agents.

Insurance is a long-term career. You can’t get into an insurance position and expect to have results right away. However, if you can make it through the slow times, insurance pays off in the long run.

Some young insurance agents are gearing up now for that future opportunity.

Jules Roussel, a 26-year-old second generation insurance agent, is one young agent looking to seize the opportunities as the older generation heads toward retirement. 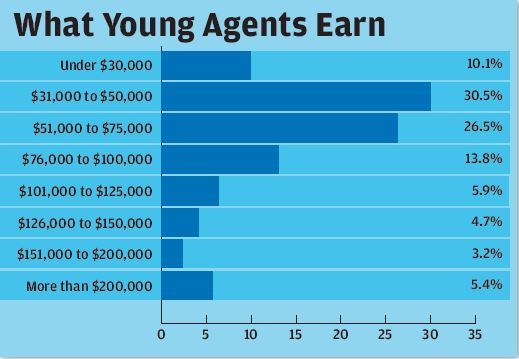 Roussel has been an independent agent for about three years at Eagan Insurance, an Insurance Journal Top 100 Agency with $12 million in property/casualty revenue in 2013, located in the New Orleans area of Louisiana.

Roussel is no stranger to the agency world. His father, Wayne Roussel, a vice president at Eagan Insurance, has spent the past 40 years building a profitable book of business and introduced his son to the insurance business when he was still in high school.

“I went to work with my dad one day to see what it was like,” the younger Roussel said. He admits he always thought his dad’s job seemed “kind of boring” but then he saw his dad in action. “He had a lot going on that day, I saw how busy he was. At the end of the day he asked me if I wanted to be an agent. I said, ‘there’s no way I could do what you do.'”

Then 12 years later, the son found himself doing the same thing. The elder Roussel, at 62, is nowhere near retirement, but Jules knows that someday he will be ready and hopes to take over his father’s book of business at that time. 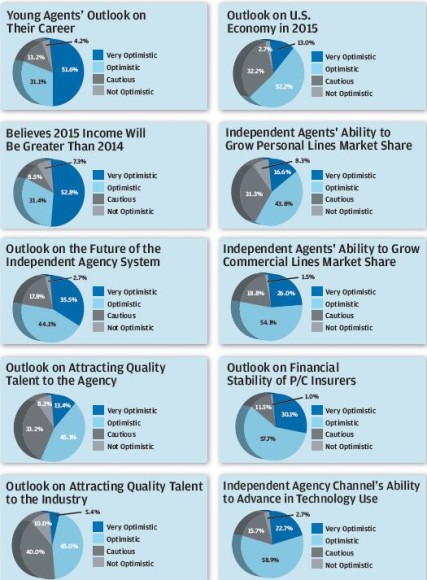 “My dad is the hardest working man that I know,” he said. “I probably won’t ever be as hard-working as he is but I strive to be.”

Roussel says his decision to become an insurance agent came from watching his father’s success all these years. It’s a great career path for young people willing to put in the work, he added. But not many young people seek out insurance as a career choice in Louisiana. Most of the agents Roussel sees are on the older side of their career, closer to retirement than not. “But if you stick with it and work hard, it’s a career that will pay off in the long run.”

A growing number of professionals are entering the insurance industry after successful careers in other industries. The same is true for some young insurance agents.

Nicole Pryde Johnson, a producer for Lovitt & Touché based in Tempe, Ariz., has been working in the industry sector since 2007. But Johnson spent her first three years after college as a first grade teacher.
Johnson says that she enjoyed teaching but it didn’t allow her competitive side to shine. “That part of me, I had to shelve for a while,” she said. “But I couldn’t ignore my competitive nature and the need to challenge myself in a different way so I started to look at alternative career paths.”

That led Johnson to a family friend who had worked in the industry for 40-plus years. “I met with him to talk about the industry and what a sales career might look like in insurance. And after numerous interviews with several agencies in the area I took a leap of faith and joined the national agency Brown & Brown Insurance, which is where I started my career.”

But while working for Brown & Brown, Johnson kept hitting a roadblock with prospects — that roadblock was Lovitt & Touché.

Today Johnson’s clients consist of a variety of large and middle market businesses but her family’s background in construction businesses has given her a leg-up when writing construction accounts. “I feel like home in the construction industry,” she says.

David Fishel, a 27-year old associate in business insurance for Fort Worth, Texas-based Higginbotham & Associates, also began his professional life as a teacher but found his way into the insurance industry when a friend’s father approached him about opening a branch office for a small agency.

After graduating from college in 2010, Fishel signed on with Teach for America as a high school math and special education teacher for two years. While working on his master’s in business administration the opportunity to enter insurance arrived.

“A good friend’s dad was one of the managing partners of Talon Insurance and they were looking to expand operations in north Texas and he approached us to open a branch office in Fort Worth,” Fishel said. Up until that point, Fishel admits he’d never thought about a career in insurance. “Never once in my life did I think I’d be in insurance but I absolutely love the industry,” he said. “I think it’s one of the best kept secrets out there.” 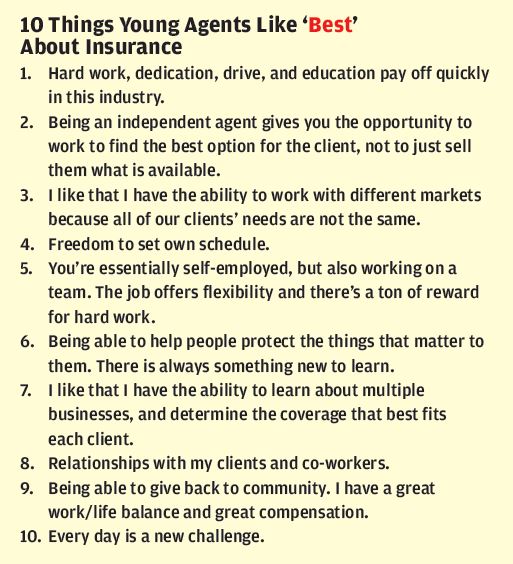 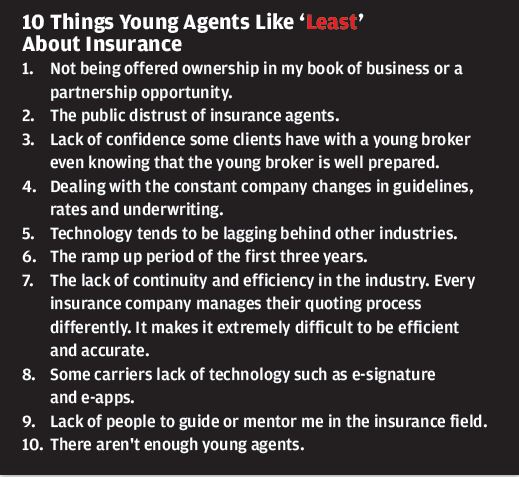 “It was a blessing,” he says. “Talon was a great organization, but Higginbotham has the resources and support we need at our fingertips. As a new producer that has been very significant.” Higginbotham, an Insurance Journal Top 100 Agency, wrote more than $60 million in property/casualty revenue in 2013.

Fishel is excited about what’s ahead. “There is a huge opportunity in the next 10 years to pick up a lot of business left by agents who will be retiring,” he says.

But acquiring those accounts may not be as easy as some think.

The long-lasting client and broker relationships that Lovitt & Touché’s Johnson found appealing about the independent agency system are also one of the biggest challenges for young agents trying to attract new business, says Nicholas R. DiCarlo, risk management consultant at J.W. Terrill based in Chesterfield, Mo., also an Insurance Journal Top 100 Agency with more than $17 million in property/casualty revenue in 2013.

DiCarlo has been an independent agent for nearly seven years but is a seasoned insurance professional. He previously worked for a direct writer for eight years prior to entering the independent agency channel. He joined the independent side for the chance to earn a higher total income and have ownership in his book of business. But it’s not an easy path to take, he says. 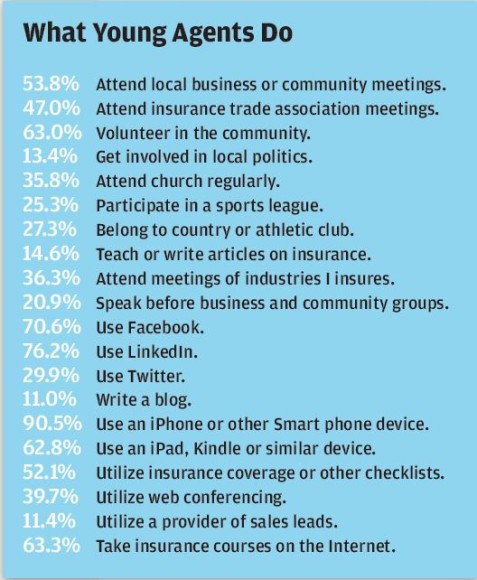 Most young professionals who enter the independent agency world don’t understand how difficult it is to be successful, DiCarlo said. “Most don’t realize how hard they will have to work — at first. They see all the glamor, and not all the grinding, that needs to place initially.”

It’s hard to build a book of business in the beginning because new agents must sever an often tight bond between the prospect and their old agent. “Your job is more or less to break existing relationships and most of the time those are pretty strong relationships especially if you are calling on larger accounts,” DiCarlo says. “It’s very challenging and sometimes takes many years.”

It’s doable, he says, but not without patience and perseverance. “You have to generate enough activity so that you are positioning yourself with those prospects.” A lot of people that come into the industry want immediate success, he says. “But you have to understand it’s about developing and positioning yourself for long-term success more so than anything.”

While the opportunities for young agents are plentiful, even young agents recognize that the career is not for everyone. 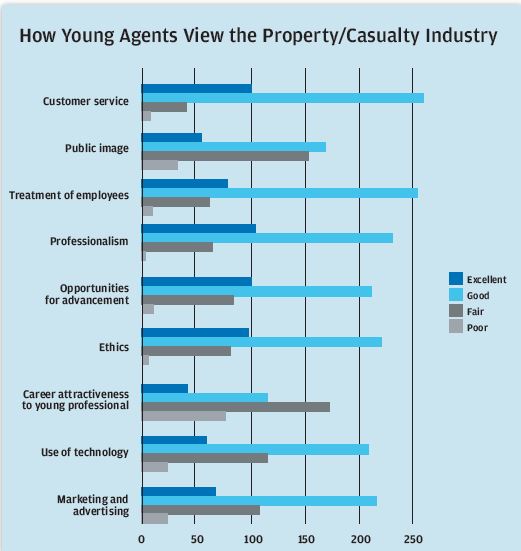 “I’ve watched many young, new agents hired into the insurance industry as producers for independent agencies, but I can only think of only one person who didn’t quit. Most of them resigned after one to five years. This job truly requires a special type of person to succeed,” one respondent in this year’s Young Agents Survey said.

Added another: “This career takes patience, which most people of my generation don’t have. We want everything, and we want it now.”

Andrea Wells is a veteran insurance editor and Editor-in-Chief of Insurance Journal Magazine.