The CGL policy is sold to contractors in three different forms:

To explain the form differences, imagine that my grandparents go to the same coffee shop every day for 20 years. They like this coffee shop because they use these special blue metallic cups that make your lips tingle when you have your first few sips of coffee. Every year the coffee shop has an annual occurrence form CGL policy with $1 million per occurrence and per aggregate limits. After 20 years, my grandparents learn that it is not necessarily a good idea to drink coffee every day out of a metallic cup that makes your lips tingle. It turns out that the metal is dangerous and my grandparents are now experiencing various lip and throat cancers arising out of their contact with the metal cups for the past 20 years.

It is true that the most they would pay for any one occurrence during any one year is $1 million, but we have 20 annual policies each with $1 million limits. All together, that would be $20 million worth of coverage available for the 20 occurrences that took place over 20 different policy terms.

The ISO CGL policy defines an occurrence as “an accident, including continuous or repeated exposure to substantially the same general harmful conditions” (CG 00 01 04 13, ISO Properties Inc., 2012, Section V, Paragraph 13). The occurrence, claims made, and manifestation occurrence policies all require “bodily injury” or “property damage” that was caused by an “occurrence.”

States have answered whether a construction defect is an occurrence in three different ways.

1) If the damage was the result of the intentional act of construction, it is not an occurrence.

2) If the damage is the unintended result of faulty workmanship, it is an occurrence.

3) Whether or not there was an occurrence depends on what property is damaged.

You may recognize this from the CGL policy’s exclusions for the insured’s product and work. However, policyholders are usually not required to prove the absence of exclusions. They only need to prove the occurrence. The insurance company then has the duty to defend, pay, or prove any applicable exclusions. This school inappropriately forces the policyholder to prove not only that an occurrence took place, but that it was not excluded.

I offer information on all three schools because of the fluid nature of construction defect litigation. States can change from one school of thought to another with the passing of a law or new court decision.

If a jurisdiction follows the third school, the construction defect will only be an occurrence if the damage is to property other than the property worked on by the policyholder.

Digging Deeper into the Definition 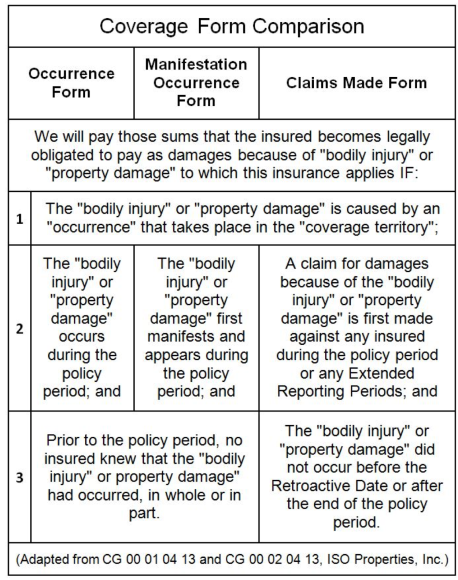 Kealy is an attorney and licensed insurance broker. He is a Certified Insurance Counselor and faculty member with the National Alliance for Insurance Education & Research where he teaches classes on commercial insurance for the CISR designation program. He is principal of his own law firm in Murrieta, Calif.