With so much attention lavished on insurtech startups that vow to replace them, young insurance agents feel they are being shortchanged in the race to invest in insurance technology. Just give them the technology tools they need, and they will be able to compete with insurtechs, chatbots and robots, they say.

“Technology across the spectrum is a concern,” wrote one young agent.

“We desperately need technology that will make it 10 times faster to do new business and servicing tasks on commercial and personal lines in order to even remain relevant,” wrote one concerned young agent. “NOBODY is building this for us. All of the fintech is aimed at replacing agents or selling direct by the carriers. If they would spend some of that money making it more efficient for us to sell and service, we could do so.” 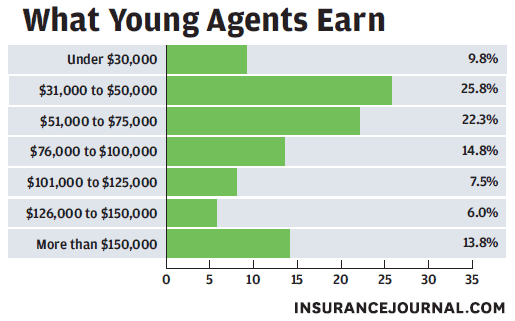 We desperately need technology that will make it 10 times faster to do new business and servicing tasks on commercial and personal lines in order to even remain relevant.

Technology in general — inside the agency and across the entire P/C industry — is an area that needs an upgrade, according to young agents responding to Insurance Journal’s 2017 Young Agents Survey, which polled nearly 600 young professionals 40-years-old and younger. The annual survey asks young agents for their opinions on the industry, their agencies and their career as an independent agent.

Advancements in technology are coming at a rapid pace but not quick enough say some young agents.

For 30-year-old Caroline Pintabone, an account executive at Ahart, Frinzi and Smith, an independent insurance agency with offices in Phillipsburg, N.J., and Alexandria, Va., being able to work remotely one day a week is an ideal fit for work-life balance, something young agents value greatly. However, when asked about the industry’s use of technology overall, she’s less than satisfied.

“Being able to work remote, that’s great. But as far as the (industry’s) technology itself, everything is super outdated,” she said.

On the bright side, Pintabone, who serves as the chair of the New Jersey Young Agents Committee and as a member of the national Big “I” Young Agents Committee, has seen significant progress in the past year in areas such as new carrier apps for mobile, but compared to other industries, insurance has a way to go to be on the cutting edge of technology, she said. ‘We desperately need technology that will make it 10 times faster to do new business and servicing tasks on commercial and personal lines in order to even remain relevant.’

‘We desperately need technology that will make it 10 times faster to do new business and servicing tasks on commercial and personal lines in order to even remain relevant.’

“I have friends that are in pharmaceutical sales and when you compare insurance to that industry, everything is so outdated,” she said.

“Some carriers are so far behind and that’s the difficult part; you have some carriers that are so advanced in terms of their technology capabilities, so those are the ones that you’re going to go to,” she said. “I have my key carriers that I go to, and I can tell you that it’s because they’re easy to access online.”

Her go-to carriers have quoting systems that are advanced enough that getting an accurate quote in five minutes or less is easy, she said. “The companies that I very rarely use are the ones that they don’t even have a quoting system online. You have to submit paper applications, which just seems absurd to me.”

In Pintabone’s view, it’s not just carrier technology that needs an upgrade. “There’s definitely room for advancement in some agency management systems as well,” she said. “There’s a lot of options (in some agency management systems) but you find that a lot of those options they’re giving you don’t even necessarily work. I feel like there’s too many options out there … they focus on too many aspects of making the system perfect rather than focusing on one aspect and perfecting that.”

Whether it’s a focus on perfecting carrier technology or agency technology, young agents want advancements and they want it now, she said.

“Young professionals want everything yesterday. I want my quotes as soon as possible. I understand that some quotes are going to require more underwriting information than others, but the quicker you can get something to an agent, the better chance you have of becoming that top carrier for that agent. My three largest companies are great, reputable companies but they also are the companies that get everything to me the quickest.”

“There is terrible technology from the carriers, especially in the excess and surplus lines market,” wrote one young agent in the survey. “Using old-fashioned paper applications is inefficient and a waste of time. … Carriers should provide their agents with fillable online systems for rapid quoting. We quote thousands of accounts a month and many complain that it took too long.”

David Baker, a young owner and founder of the Stratum Insurance Agency in Newport Beach, Calif., said price is not the only reason big direct writers are excelling in personal lines. The reasons companies like GEICO crush independent insurance agents isn’t just about the price. “It’s ease of use,” he said.

“Look at how GEICO does business. They have a customer go on their website, input all the information, and sure, the customer still calls them, but they just give them the quote number. They say, ‘OK, you already put in all your information, you already have the quote, great. Do you have any questions, or do you want to just buy this?’ When they call an independent agent, we have to spend an hour on the phone with them trying to get their information into these systems.”

Technology lags exist in many parts of the insurance process, not just quoting, binding and processing. Risk management is another area where agencies could step up innovative tech use.

One young agent added: “Although new technology has been adopted by our agency I believe other agencies could pick up the pace a bit. When competing on new business very rarely has a client been introduced to new technology to assist them in managing risks.”

The industry has been ripe for disruption from insurtech startups such as on-demand property insurer Lemonade because many traditional insurers have been hampered by legacy IT systems and regulatory transformation programs. That has created limited funds to invest in innovation, according to a KPMG report, “The Pulse of Fintech Q4 2016 – Global analysis of investment in fintech.”

“There seems to be significant pent-up demand for solutions to the problems challenging the insurance industry – from the need to improve operational efficiencies and cost effectiveness to creating more customer-centric product offerings,” said Murray Raisbeck, Partner Insurance, KPMG in the UK, who was quoted in the report.

“When these challenges are combined with the growing availability of tech from other sectors with the applicability to the insurance sector, there’s little doubt investment in insurtech is going to keep booming,” he added.

Ron Berg, executive director of the Agents Council for Technology (ACT) believes there’s a misconception in the industry about the growing threat of such insurtech start-ups such as — that it’s all bad. “It’s only bad if we don’t pay attention to it,” he said. “Yes, we as an industry have known for a long time that we have to be faster to sense, react and implement solutions. We are not at that point of resting on our laurels anymore. We have to find the best ways to assimilate and increase the ease of doing business and absolutely insurtechs are driving the change.”

Most young agents responding to the survey don’t appear worried about the insurtech movement. Just under one-quarter of respondents (24.0 percent) believe that insurtech will lead to serious disruption of the industry. However, 64.1 percent do believe the industry overall has been too slow to adopt new technology.

“Technology is going to make the independent agency world from a personal lines standpoint and small commercial difficult over the next 10 to 15 years,” said Ryan Von Haden, partner/vice president of Business Accounts at the Tricor Insurance, and the National Association of Professional Insurance Agents’ (PIA) 2016 Agent of the Year. “I don’t think larger commercial property and casualty is really going to be hit as much because of the need for local service and relationships. But over the next 10 to 15 years, technology will lead to big changes in our industry. There are already different online carriers getting into the insurance.”

Insurtech startups are moving the industry in the right direction, said Brent Rineck, chief information officer for ABD Insurance & Financial Services. “It’s forcing us all to take a higher emphasis on technology but I don’t think it will ever replace us,” he said. “But it’s definitely pushing us.”

Kitty Ambers, CEO of the Network of Vertafore Users (NetVU), agrees. Insurtech startups are providing the industry and agencies with an opportunity to get better.

“We need to take the time to decide where we are going, where we want to be, and how are going to get there,” Ambers told Insurance Journal.

Insurance Journal’s Young Agents Survey 2017 polled nearly 600 young agents nationwide from March 1-17, 2017, on their opinions about the industry, their agency, and how they feel about being an insurance agent.

Older Side of Young

What Young Agents Do