And once again, the surplus lines sector outpaced the results of the entire property/casualty industry by a wide margin, according to the “2012 U.S. Surplus Lines Market Review” by A.M. Best, and sponsored by the Derek Hughes/NAPSLO Educational Foundation.

In 2011, domestic surplus lines insurers’ (DSLI) composite net income rose by 11.3 percent compared with the 46.8 percent decrease for the entire P/C industry, the report said. The DPSL composite represents about 58 percent of the total U.S. DSLI market, or some $13.2 billion in direct premium written (DPW) in 2011. DSL insurers write some 72.5 percent of the total surplus lines market.

We’re in that middle ground.

“2011 was an extraordinary and historic year from a loss standpoint,” said David Bresnahan, president of Lexington Insurance Co., in a webinar hosted by A.M. Best and the National Association of Professional Surplus Lines Offices (NAPSLO). “2011 was the year that blew out the traditional property strategy, which is that you should have great diversification of risk.” The diversification rule of thumb didn’t help insurers writing accounts in the United States in 2011, he said. “Last year, the bigger you were, the more diversified you were, the more losses you took.”

So far in 2012, losses seem to be more manageable; however, Bresnahan says the jury is still out.

“For Lexington in the first 6 months of this year we saw just under $300 million of cat property loss. That was exactly as we had anticipated,” he said. But with Hurricane Isaac bringing in an estimated $2 billion in losses in the third quarter of 2012, and two months remaining in the hurricane season, things could change quickly.

A.M. Best believes the surplus lines market has a good chance at producing better underwriting results in 2012 than 2011 thanks to the decrease in catastrophe losses through mid-June 2012 and rate increases on certain lines of coverage. Those two trends are generating “guarded optimism amongst surplus lines insurers,” the report said.

“Through the first half of 2012, general market conditions have continued the momentum that began during the second half of 2011, with prices firming and coverage terms and conditions showing more signs of tightening,” the report said. “With interest rates remaining depressed and financial market volatility the current reality, underwriting performance will again be the key driver for operating performance. It remains to be seen for how long, and to what degree the current price firming will last.”

The DSLI market also managed to increase their DPW by 3.2 percent in 2011, reversing a four-year trend of declining premiums for the industry. 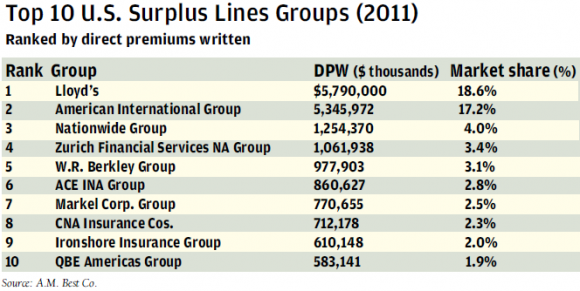 While rates are moving up, competition in the market is still plentiful, said Robert Sargent, president and CEO of Tennant Risk Services and the current president NAPSLO, who also participated in the webinar.

“We are in that middle ground,” Sargent said. “There is competition and there’s a great deal of interest in maintaining market share from underwriters.” Underwriting is more thorough, he says, and rates are inching up but competition in the market remains. Sargent says there continues to be “a lot of participants, a lot of underwriters, a lot of people still competing for business.”

But the change in market conditions is not drastic, he says. “It’s fragmented, not hard, but moderate increases.”

There are pockets of business which seem to be under more stress than others, says Lexington’s Bresnahan. He describes New York’s construction market as stressed, but also views national account umbrella, energy, railroad, and life science business as areas experiencing a little more change than others.

In his view, there are a number of factors driving increase in rates, but availability is not one of those factors.

“Capacity is plentiful,” Bresnahan said. “It’s really not the balance sheets that are driving the pricing change. I think of it more as the income statements are driving the rate changes.” He sees carrier management changing strategies when it comes to how low of a combined ratio is acceptable to underwrite at a satisfactory return.

“There are many underwriters that aren’t too excited about the pricing levels in the business and that what’s driving a lot of the rate change.”

Despite 2011 being a historically difficult year, Lexington’s balance sheet added to its surplus level by about $300 million, he said.

“We suffered roughly $1 billion of net cat property loss,” Bresnahan said. “But what helped offset that loss was the diversification of our business. At the end of the day, we had a 102 combined for the year. Not too bad given the magnitude of the losses. … and while the investment yield is low, when you have $25 billion to $26 billion of invested assets, which we have, and you get 4 percent to 5 percent return, that makes up for an awful lot of underwriting loss.”

In the end, the losses for 2011 were reasonably spread around amongst the insurance and reinsurance community, he said. “So while everyone got hurt there was only a few that got hurt very badly.”

Sargent says that he sees more underwriters realizing the need for increased rates and tighter underwriting controls. What’s different in this market cycle is that the change is occurring in a slow and steady manner.

Insurers are making the transition in moderation and with very healthy balance sheets, he says. It’s a fascinating time in the market, he says. “There’s not any kind of severity in pricing except maybe in a couple of different segments. Overall the market change is moderation in rates. Tightened underwriting and stiff competition; it’s not being driven by capacity problems.”

Sargent says that a great example of the market change can be found in errors and omission liability for the real estate sector.

“That business has been very tough and there have been a lot of withdrawals,” he says. “But there is some level of competition and a number of markets willing to participate in that segment. … But detailed underwriting and availability continues.”

Lloyd’s held on to the top spot as the leading surplus lines writer in terms of DPW in 2011, generating just under $5.8 billion and representing 18.6 percent of the total surplus lines market share.

The top 25 surplus lines writers generated a 1.4 percent increase in overall DPW in 2011.

“Many surplus lines insurers have reported lessening competitive pressure from standard market companies,” the A.M. Best report said. “While this trend has not signaled a decisive shift in the market, it was enough to help reverse the four-year decline in premium produced by DPSL writers, the heart of the surplus lines market.”

The report also noted that for the eighth year in a row, the surplus lines industry reported no financially impaired companies, while in the admitted P/C industry, some 34 insurers reported financial impairments in 2011.