The U.S. workers’ compensation market saw solid gains in 2014, thanks in part to premium increases and favorable claims frequency. This was the fourth consecutive year in which the industry reported improved results, A.M. Best said in a report.

A.M. Best said the positives are near-term: “While the industry’s underwriting performance benefits from an overall positive rate environment in 2014, competitive market conditions and persistent low investment yields continue to compress operating margins. Improved fundamentals in recent years appear to indicate that further improvement in results may continue over the near term, given growth in premiums from rate increases and favorable claims frequency relative to claims severity.”

The insurer produced $2.2 billion in net premiums written during 2014, giving it a 4.8 percent share of the U.S. workers’ comp market compared to $3 billion and 7 percent market share in 2013.

Liberty Mutual said the drop is part of its strategy to rid itself of weak accounts. “Over the past several years, Liberty Mutual Insurance has strategically reduced its exposure to workers’ compensation by targeting under-performing accounts that were contributing to unacceptable results,” the company told Carrier Management. “As a leading provider of commercial insurance today, we continue to be a strong market for workers’ compensation insurance where our claims and loss prevention expertise and customer service focus provide value and superior outcomes to our customers.”

Hartford Insurance Group had $3 billion in net premiums written during 2014 for a 6.4 percent share of the market – 1.4 percent higher than the $2.97 billion generated in 2013, when it had 6.7 percent of the market and was in third place.

This is an edited version of an article published by CarrierManagement.com. 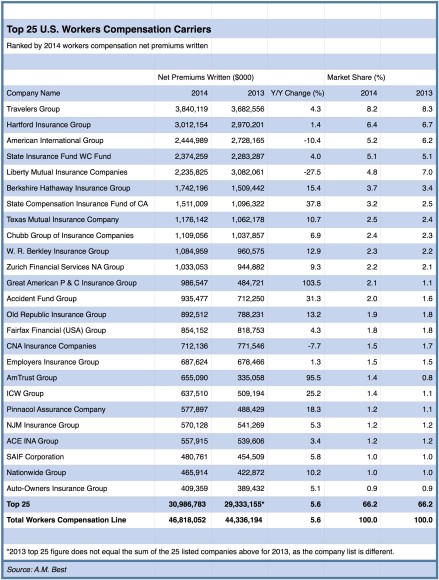